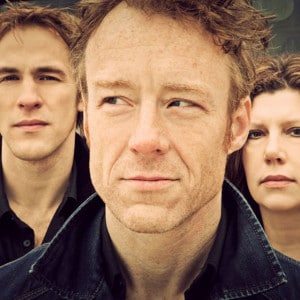 “We welcome people who speak the truth and believe in beauty,” greets a member of Liverpool Cathedral’s senior clergy. Tonight, Low are here to preach to us as we’re sat in the well of the cathedral, a building that took over 70 years to build and was only completed in 1978. It’s certainly warm and welcoming inside; something of a sanctuary against the rain and hail outside. Tonight does have something ethereal about it.

Opening with Words from their 1994 debut We Live In Hope, images of old planes are projected onto the cathedral brickwork. Steve Garrington’s bass reverberates around, while Mimi Parker’s minimal drumming and backing vocals envelop you completely and comfortably. Canada, with a backdrop of paratroopers now projected, brings something a bit more uptempo, before turning into something rather post-rock like. The moodiness suits the grandeur of the venue.

Plastic Cup from this year’s The Invisible Way follows, achieving a haunting, almost majestic quality; Alan Sparhawk’s vocal achieves an unlikely height, especially considering his spoken voice has that deep Minnesotan drawl, while his wife Parker complements it with her emotive yet subtle tones. It’s a relatively straightforward opening.

Yet it’s from that point that the show is transformed into something divine. Majesty/Magic lives up to its title. Garrington’s bass, Sparhawk’s guitar, the single tom drum of Parker’s and the vocals of both produce moments one seeks during any live performance – awe, tingling down the spine and complete perfection. The way every component comes together, coupled with the magnificence of the cathedral, is almost overpowering. Achieved with no bombast or bluster, just something that comes from somewhere deep and heartfelt. It’s difficult to articulate.

Yet this isn’t the only time this happens this evening. Just Make It Stop, again from this year’s The Invisible Way, moves one to tears; the overpowering emotion in Parker’s vocal echoes all around, leaving you transfixed and mesmerised. Where the album version has an aching if somewhat polished emotion that is still very effective, this has a rawer authenticity to it. It’s sublime.

The same can also be said for Sunflower from 2001’s Steve Albini produced Things We Lost In The Fire, with lyrics referencing the Star of David and someone choosing beauty over life (“When they found your body… with your half of the ransom, you bought sweet… sunflowers and gave them to the night”). It’s marvellously appropriate for here and now. As is (or, perhaps, not) Murderer from 2007’s Drums And Guns, as someone supposedly asks God whether to be a bloody, merciless crusader: “You may need a murderer, someone to do your dirty work.”

“This song can be easily misinterpreted,” says Sparhawk. What does he mean, then? A murderer/queller of sin, perhaps? A preacher? What about lyrics such as: “And I’ve read your book, it seems that you could use another fool?” A case of someone searching blindly for truth? Indeed, Especially Me carries this theme of truth finding further, with Parker’s vocal again teeming with emotion as she sings: “‘Cause if we knew where we belong, there’d be no doubt where we’re from, but as it stands, we all need the truth.”

Above us at the back of the well, one of Tracey Emin’s neon signs hangs above: “I felt you and I know you loved me,” it says. Tonight, we felt Low. And we loved them. It felt like they spoke a sort of inner, deeper truth and it was beautiful. Overwhelmingly so. This was as close a religious experience as a gig can be.