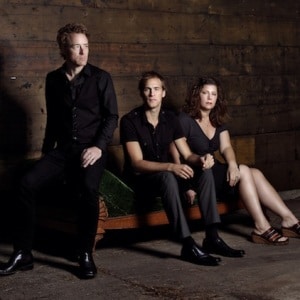 London’s Royal Festival Hall has long been a haunt of those bands beloved of music critics and the indie intelligentsia but largely ignored by the general public and the charts. This makes it the perfect stop for Low on a current world tour that brings them to London from Birmingham via Spain, after last month’s ATP performance, and will see them return to their native USA before coming back to these shores in July.

As was probably to be expected, tonight’s set, though well-balanced between the old and new, leans heavily on their most recent album C’mon. In front of video backdrops provided by British artist Peter Liversidge that provide a 10 minute countdown to show, the band emerge clad in black and dripping feedback to launch into Nothing But Heart, the first of three consecutive songs from their most recent album, C’mon.

Following up with Try to Sleep and Nightingale, the slowcore drone of the opener gives way to Alan Sparkhawk and Mimi Parker’s ridiculously lush harmonies before falling back once again into doom-laden bass miserabilism. Last night’s gig at Birmingham’s Glee Club must mark the most inappropriately named venue they’ve ever played.

It’s not until the fourth song of the evening – Hand So Small – that they deviate from C’mon, returning back immediately for Witches and Especially Me. Then it’s time to turn back the clocks a decade for the achingly beautiful crowd pleaser Sunflower – a fan favourite from their 2001 album Things We Lost In The Fire.

All of this is played against black-and-white images of WWII bomber planes, circus ringmasters, 1950s motors and parachutists, augmenting their stark and explosive musical turns perfectly. They are trying – and succeeding – to fete an artier crowd than ATP’s hipsters, and the juxtaposition is a perfect match.

Low are a sea of contradictions: minimalist one moment, drenched in feedback the next; harmonising vocals with skill far beyond that of most rock bands over guitars and percussion that owe a debt to the grunge cousins they’ve grown up with on Sub Pop. They’re hard to categorise (and hate the slowcore label most often tied around their neck) but have carved out a niche that makes the slightly knowing, holier-than-thou (with good reason) RFH their ideal home.

The second half of the concert plays more like a compendium of old favourites if not exactly a greatest hits (it’s the charts’ loss), taken mainly from 2002 album Trust and 2005’s The Great Destroyer, including Little Argument With Myself, Everybody’s Song and In The Drugs. They end the main part of the concert on 2007’s Murderer. Slow and hauntingly beautiful it provides the perfect comedown.

The encore is as simultaneously dark and euphoric as what has gone before. Shame, the comeback opener, is nearly two decades old, but has more than earned its place amongst the newer material; Dinosaur Act drags us forward into the new century. As if to show their confidence in their future, they end on $20 from their most recent offering, thanking the London crowd for being “so kind” to them. The pleasure is all ours.