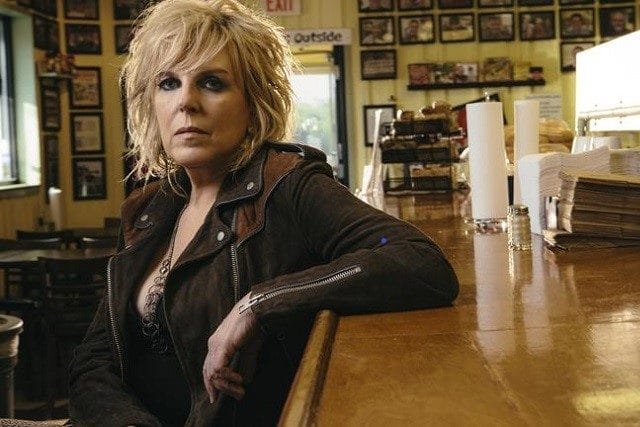 On playing London’s Brooklyn Bowl back in 2016, Lucinda Williams had seemed somewhat perplexed. “Whawwwt is this dive?” she enquired in her distinctive southern drawl. “Why have they booked me to play here?” By way of contrast, she seems considerably warmer and more relaxed at the Barbican tonight. “Thanks for coming out, it’s such a beautiful hall”, she says. Certainly, the all seated, reverential atmosphere seems well suited to this thoughtful and superbly presented performance of her classic 1998 album Car Wheels On A Gravel Road in its entirety. Car Wheels provided Williams with her big critical and commercial breakthrough. Although by all accounts its creation was a fraught process (original recordings were scrapped and both Steve Earle and Roy Bittan of the E Street Band worked as producers), Williams clearly retains genuine affection for its narrative songs. The fruitful synthesis of the music, combining country, blues, southern soul, and R.E.M.-tinged jangle, also provides an ideal springboard for the varied skills of her excellent touring band Buick 6.

Full album performances have been very much in fashion for some time now, particularly for big anniversaries, and the development of entire tours around them does not look likely to disappear any time soon. How successful they are depends upon how invested artists remain in the material and exactly how they decide to present them. For this tour, Williams has introduced both visual and storytelling elements. The show becomes an entertaining and often moving journey through her childhood, her adult relationships and her inspirations (including “revealing a few secrets”) not entirely removed from recent combinations of musical and scripted performance such as Springsteen On Broadway. We begin with home film footage of a teenage Williams with her family, describing how she grew up with poets (her father, Miller Williams, was a poet and University professor) and how her childhood provided a “deep well” from which to draw in her lyric writing. Williams and her band then take to the stage and launch straight into Right In Time, the album’s resonant, chiming opening track, suggesting the songs will be performed in their original sequence. In concert, Williams tends to protract and extend her vocal phrasing, and she relishes this during this sprightly opener.

Following this, we get the first of the evening’s many stories, with Williams recalling her father hearing an early version of the album’s title track at a show and coming backstage to apologise – a recognition that the child in the backseat of a car in the song’s final verse (“a little bit of dirt mixed with tears”) was Lucinda herself. Until then, Williams suggested, she had not quite realised that the child’s perspective in the song was in fact her own. The song also brilliantly encapsulates Williams’ eyes and ears for small details, not least the “smell of coffee, eggs and bacon” in the first verse. We also hear about the difficulty in finding an actual gravel road for the album’s cover image. The eventual selection came from a book of Birney Imes photography, focusing on juke joints, that also provided much inspiration across the album, including a piece of scratched graffiti that inspired the warmly received 2 Kool 2 Be Forgotten (it turns out that the oblique “Junebug Vs. Hurricane” was part of the same inscription, commemorating a romance perhaps, although Williams also uses the title to celebrate blues singers). Although Williams accepts that the elegiac Drunken Angel could have been about any number of wayward artists whose lives were tragically cut short (“from Gram Parsons to Kurt Cobain”), the intended inspiration was Blaze Foley (recently also the subject of Ethan Hawke’s film Blaze). The already poignant Lake Charles is rendered more moving by images of its subject, Williams’ former boyfriend Clyde Joseph Woodward III, who died from liver cirrhosis in 1991. One particular photograph appearing on screen, in which Woodward holds a can of food in one hand and a bottle of Jack Daniels in the other, is highlighted by Williams. The song provides another example of Williams’ peerless, effortlessly emotive phrasing.

Other highlights include a taut Metal Firecracker, which is preceded by a dry and amusing explanation of the tourbus romance behind the song, including the swift conclusion of a near-simultaneous relationship. This song is an absolute delight, and guitarist Stuart Mathis’ gorgeous counter melodies enhance its beauty and insight. Joy is much less of a rarity in standard Lucinda Williams sets, but it acquires a new depth and intensity in the context of the full album performance. I Lost It, a flippant response to billboards and car signs with phrases such as “I Found It!” provides some much needed levity and Concrete and Barbed Wire, originally inspired by the fall of the Berlin Wall, is inevitably afforded a new contemporary gravitas through the policies of “our guy – I’m not even going to call him the President”, a statement met with a roar of agreement from the audience. If Williams sometimes seems to be an awkward or wayward performer (her lyrics perched on a music stand), tonight she perfectly encapsulates the melancholy and depth in these songs. In addition to the photographs and film footage on screen, shots of Williams’ lyric notebooks, either in earlier versions or complete with amendments, make clear the care with which Williams approaches the editing process. The effect is to illuminate the brilliant way in which Williams transforms life experience into song, with stories rooted in location and emotion.

Following the performance of the album, Williams and Buick 6 dig deep into the back catalogue for a judicious selection of songs, including a solo take on the dusty and evocative Ghosts Of Highway 20, a magnificent Steal Your Love, during which the outstanding band journey through a wide range of textures and dynamics (Butch Norton’s drumming is superb here) and a lightweight but fun slice of no frills rock n’ roll on Honey Bee. For the encore, Williams returns to the roadside world of signs, slogans and scratched messages so brilliantly evoked on Car Wheels, with an accappella Faith And Grace segueing into a turbulent, bluesy Get Right With God. It’s a perfect conclusion to a brilliantly executed and touching performance.