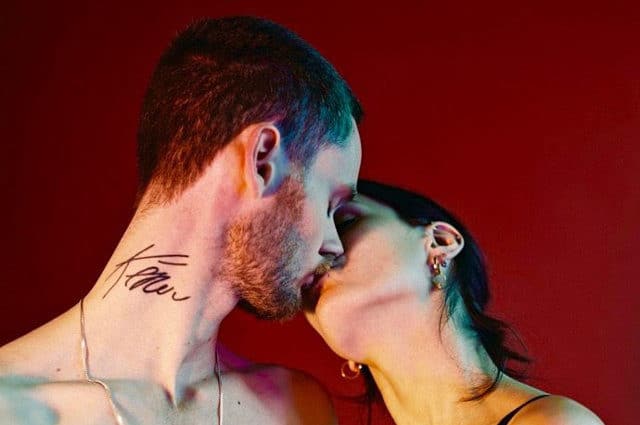 You can understand Ellery Roberts being wary of the wide-mouthed harbingers of hype. In a previous life, in a previous band those self-same proclaimers of importance left his earlier act (WU LYF) with impossible expectations to live up to.

But, he may have to get past the deja-vu and we may have to hope that it won’t have the same detriment impact on his new project, because from here, there’s something special about LUH.

This performance connected. Despite the fact that their debut album has only been out for a month, songs were sung back at the band with a rare and unexpectedly solemn kind of fist-pumped, eyes-closed, earnest passion.

You can understand why. These are broken songs of hope, grand and epic, bowed but still kicking and screaming. Some of it has recognisably evolved from the wreckage of WU LYF – most obviously Roberts’ voice, which you’d struggle to hide with an 80ft tarpaulin. Auto-Tune? Plumbing it through any sort of processing tool would surely result in little more than a whisp of smoke, the sigh of a capacitor and the electronic posting of a resignation letter through the producers door.

But the rest of the setting makes it different. Less the nihilistic roar of a bear giving up and deciding to end it all by chewing through a bucket full of gravel, more the impassioned howl of a man who has seen the glimmer of a better future through the fog of disillusionment. Which may have something to do with the person on his right, Dutch visual artist Ebony Hoorn, the other half of LUH.

Her mellifluous tone is an ideal counterpart for his gargantuan bellow. When she takes the lead on Future Blues it becomes the hinging point for the set, a calm centre of the storm which passes by on either side. Which is at times, punishingly loud. It’s possibly the one criticism, that in and amongst the jetstream of noise that Roberts, Hoorn, multi-instrumentalist Oliver Cooper and drummer Simon Hermitt make, there’s a bit of subtlety lost.

Still, it’s easy to forget subtlety when you’ve got $oro and it’s head-pounding, earth shattering techno breakdown. Or the tribal drums which power Beneath The Concrete, placing it as the soundtrack to a dystopian carnival. Or the closing First Eye To The New Sky, complete with dedication to those who “were at Creamfields in 2001”, which is blissful and defiant.

And anthemic. Properly, memorably, distinctively anthemic. Which given how early we are in LUH’s life, is wildly impressive. Ambitious, impassioned music, delivered with an unshakable belief by its makers. Afraid to say it, but expectations may have just been set pretty damn high. Sorry Ellery.