by Rob Mesure
published: 7 May 2016 in Live Music Reviews
Tweet 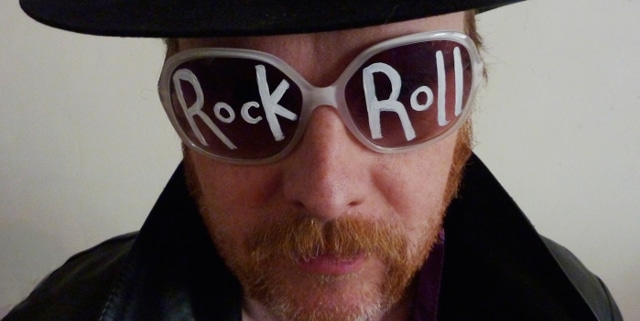 “This is the second set,” Luke Haines announces, alone on the Lexington’s stage, with wine glass in hand, a few shirt buttons fallen open and his white suit jacket slightly crumpled. “Same songs, just a bit looser.” Aren’t we all?

Following last year’s avowedly analogue set of haunted electronica, Haines has emerged from his nuclear bunker after a number of years spent on an ever-changing series of projects variously embracing 1970s New York,  Saturday afternoon wrestling and anthropomorphic Rock And Roll Animals. Before all of this, there was The Auteurs, and, two decades on, it’s this earlier self which Haines presents over two sets tonight; the younger man still raging within the older’s shell.

Without a band or the novelty of new material to distract the attention, this kind of solo, acoustic retrospective stands or falls on its material, a fact Haines is acutely aware of from the off. “This is a song I never really rated that much,” he says, introducing the opening Underground Movies. “They were all rubbish,” he adds, smirking conspiratorially; “let’s go home.”

More songs follow from Now I’m A Cowboy (1994), the Auteurs’ second album. Despite a slightly fraught history, according to his scabrously funny memoir it’s an album with which Haines has made his peace (“with another bit of twenty-first-century hindsight,” he’s decided it’s “a fucking classic”), and it’s the one he leans on most heavily here, telling us how long it’s taken him to play these songs again. “Here’s one I haven’t played since 1922,” he quips before Chinese Bakery, adding, after a beat, “I meant 19.22 tonight.”

He’s in a similarly genial – and very funny – mood throughout,  prefacing material from around 1996’s savage After Murder Park – including the melodic, but oh-so-sinister title track – with a must-read segment from Bad Vibes involving an impromptu album playback to three-quarters of Metallica – wedged into his tiny sofa – and explaining that he stopped playing The Upper Classes (“Formative years were a drag, but we passed the time somehow/I’m in cahoots with the upper classes now”) as he thought Pulp had tackled the same subject in a far better way. But it still rings true in 2016, arguably more so: surely Call-Me-Dave and our Bullingdonian overlords can’t pretend to want to be like Common People?

The songs sound great, too, with Haines’ voice having lost little of its breathy rasp. Only the songs from Baader Meinhof (which he performs with an electric guitar, to shouts of “Judas” from a few wags in the audience) seem to lack a little here. But that’s more likely to be down to that album’s rather intriguing synths, strings and tabla soundscape: he also plays Home Again – one of sadly only two selections from 1993’s New Wave – electrically, and it’s spine-tingling, never sounding quite as much like the sainted Go-Betweens as it does here.

Haines seems to enjoy revisiting this material – in the words of Future Generation, neatly ending the set as it did the Auteurs recorded output, “Of course I love the old songs, from New Wave to Murder Park” – and it certainly goes down well with the crowd, who are happy to allow him an extra sing-along finale of his solo Lou Reed Lou Reed, in the knowledge that they’ve just witnessed something special. He doesn’t normally avoid Auteurs songs, though, and some here may have expected, say, Showgirl, Lenny Valentino or even Unsolved Child Murder (still among his most queasily beautiful contributions to the canon), none of which are played. But that’s Haines, ever the contrarian; some things never change.