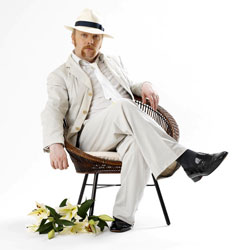 Black Box Recorder lynchpin Luke Haines has just released Das Capital, an album of his old Auteurs and Baader Meinhof songs re-recorded with a string section. Now was London’s chance to see what the collective could do with old – and new – material in a spacious church.

Gone were the original Auteurs on the grounds of “diminished musical responsibility,” the programme stated. A keyboardist, drummer and bassist joined Haines and eight strings players on stage – and it was easily big enough to fit a full-scale orchestra on. St Luke’s is like that – on the outside it’s a quaint old church, but on the inside it’s a maze of rooms, lifts, stairs and a vast auditorium decked out with wood, steel, cloth and anything else but what you’d expect seeing it on the outside.

Proceedings began with piped classical music – Land Of Hope And Glory was played at least twice – and a video of nearly-hit Lenny Valentino mimed by a pretend band. A typically perverse start to the gig saw Haines, resplendent in a cream suit and white shoes, take to the stage late – and tell us he was worth waiting for. But of course.

Every track had to be counted in by the drummer, and for the first few songs it seemed only Haines’ confident (arrogant?) stage presence held the 12 musicians together. Of course, his cult following were here to see St Luke, regardless of who was playing with him – for The Auteurs was always first and foremost his band, and every one of the songs played tonight would be from his pen.

Some of the slower and more intricate old songs in the new format gained depth – Junk Shop Clothes, How Could I Be Wrong and Show Girl particularly. And there was even time for new tracks Satan Wants Me (Not You) and The Mitford Sisters, both of which failed to suggest any deviation from Haines’ trademark sneering vocal style or penchant for writing instantly memorable chorus lines.

After a break and a trek to the crypt bar, fans returned to find the strings gone – Haines cranked up his guitar and the pace shifted up several gears. Mogadishu, Buddha and Your Gang Our Gang upped the ante, and an encore of The Oliver Twist Manifesto set the beatbox going to toe-tappingly good effect.

Black Box Recorder one month and The Auteurs the next, this rendering showed Haines as a maverick songwriter with a warped sense of humour, no matter which musical arrangements adorn his songs. Long may he continue to beguile us.