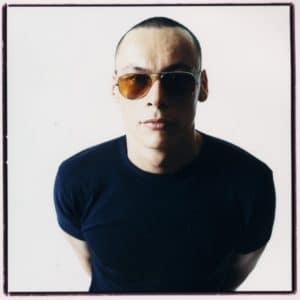 If you’d asked me what electronic acts are like live before this gig, I would have sided with majority opinion and said, with one or two notable exceptions, they are really rather boring. But Luke Slater, while being the very personification of tech-headedness, has a clever ruse for the live stage – called Ricky Barrow.

This fey gentleman, dressed in a long coat, sashayed around the front of the stage throughout an electric (in every sense) set and added colour and emotion to Slater’s live show. From the first track and recent single Nothing At All to the utterly compulsive Take Me Round Again, Barrow’s voice was far better live than on record and his stage actions gave the set a focal point for the audience to watch.

The audience split fairly evenly between hardcore tech-heads, many of whom could have acted as Vince Clarke stunt doppelgängers, and label guests. The tech-heads were clearly wrestling with the fact that Luke Slater doesn’t just experiment with electronic music these days but rather writes (shock, horror!) pop songs, while many of the label guests (or press core, if you like) were clearly not expecting a smattering of Slater’s hard techno back catalogue, which he offered up towards the end of the set to the delight of his fans.

In one song, I Can Complete You, Slater assumed the mantle of vocalist and sings at us through a vocoder which so distorts his vocals that we can’t hear the words. Dressed as some quasi-American football star and surrounded by synths, his smooth features and single silver cross-shaped earring all combined to suggest that he was half robot and half man. Which was great for this song. Barrow obligingly took over a synth and produced a luscious strings harmony to the piece.

He’d go down a treat in a club, for even in the tiny but excellent gig venue that is 93 Feet East, Slater’s songs were getting the floor moving in all sorts of epileptic ways. From bearded hippies to trendy students, the venue at large loved what they heard. And now he’s on the label that gave us Erasure and Depeche Mode. One to watch very closely.