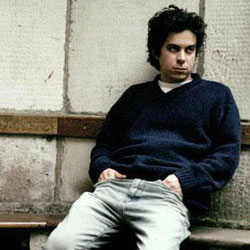 In an uncomfortably busy venue, with a delayed headliner and the bar not being within reaching distance, it’d take someone pretty special to make you put your dummy back in your mouth and hush up.

Luckily, our main attraction is M Ward, Portland, Oregon’s finest export who has been quietly releasing searing, honest and exceptional records for the best part a decade, picking up a dedicated following along the way.

He’s also contributed to records by Bright Eyes and She & Him and played guitar for Bruce Springsteen, all of which makes him something of a force to be reckoned with in the alt.folk genre.

Tonight sees Ward in the intimate surroundings of this Soho watering hole and it’s clear that the astoundingly attentive audience have been waiting for this for some time. He gets off to a brilliant start – with nothing said to the audience he plays three numbers solo, with only guitar and harmonica for accompaniment. Calling his voice inimitable would be a gross understatement, the fragile, croaky tones of Never Had Nobody underlines the songs’ warm lyrical sentiments.

Fragility is a theme that occurs throughout the evening. Requests for no photography were broadcast prior to the event and this is reiterated by Ward himself, stating that there were people in the venue who would be of service as disposers of cameras if he saw fit to call on them. A case of artist respect vs audience inclinations then, and although it doesn’t exactly put a dampener on proceedings, it does feel like we’re being lectured at.

It’s soon forgotten though because it’s with his full band that Ward really begins to look like he’s having fun. The band are exceptional, particularly when some unknown instrumental tracks are aired. It begins to feel like a lock-in, with the audience swinging their pints with glee aloft in the air. This is sealed with breathtaking renditions of Requiem (to which an enthusiastic audience member exclaims “Damn that’s a tune!”) and a sing-along Poison Cup, arguably his finest moment, which manages to be celebratory despite its bleak subject matter.

It’s refreshing to see someone with such sincerity and charisma, which makes it all the more irritating that his is not yet a bigger name. But as the last chords of Magic Trick are played out and a triumphant Ward punches the air, it’s surely only a matter of time before latest album Hold Time and more live shows like this transport him to bigger things.