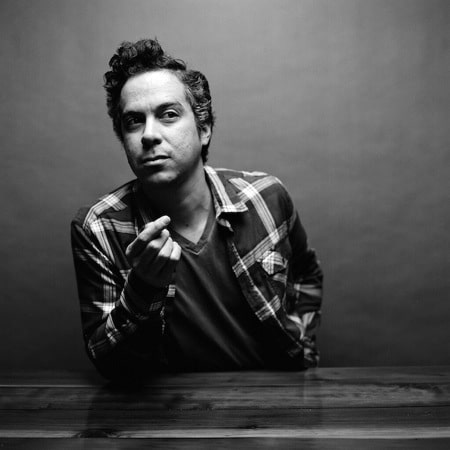 Seeing as this gig sold out in a mere 24 hours, it’s obvious from the outset that Portland, Oregon residing songwriter Matthew Stephen Ward is playing to an ardent audience. Still, it’s quite something for a solo performance so low key to utterly captivate a hushed theatre for a 55 minute main set plus two encores.

The reason for him being in the UK is to promote forthcoming new album A Wasteland Companion, due out in April on Bella Union. He says he’s excited about the release, whilst also realising that his shuffling and slightly stooping stage presence might well not convey any such sense of exuberance. Several exquisite songs, mostly played on acoustic guitar, from the new record have been performed before he really says anything. Long instrumentals and unconventional formats give time and space to soak up his fine, effortless playing.

Wasteland’s first three tracks, the rustic Clean Slate, the very catchy Primitive Girl and dramatic Me And My Shadow all feature early on. Yet, wonderful fretwork aside, it is when he takes a seat at the piano for a spellbinding rendition of the title track of previous album Hold Time, with its deceptively simple swooning and swelling chorus, that the gig reaches altogether new dizzying heights. This is followed by Rollercoaster and Daniel Johnston tribute Story Of An Artist.

Back on guitar, A Hundred Million Years is followed by another highlight, Rave On, which sees him building intricate loops of guitar, leaving him able to amble across the stage for a drink of water while his effects pedals do the work for him. Even the slightly scuffed notes seem full of intent. His cover of David Bowie‘s Lets Dance, featured on the soundtrack to 2007 film Eagle vs Shark, sounds as disarmingly different to the original as it did on breakthrough Matador release Transfiguration of Vincent, complete with spectral harmonica solo.

So haunting has the gig been, it almost seems abrupt when he switches the loops pedal back on and leaves the stage to the strains of Rave On. Fortunately he returns to sing a few more gems, including a cover of Nature Boy, which was once made famous by Nat King Cole but also recorded by Big Star on their album Third. It’s this version Ward says he has in mind.

Shouts for particular songs reach fever pitch as he announces he only has time for one more. One particular roar for “a medley of half an hour” gets the biggest laugh of the evening. Yet the retiring Ward opts for a lilting Helicopter and then exits with a humble bow. He’s an unassuming talent, but a pretty mighty one.