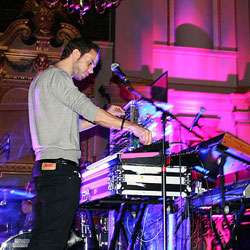 If you’re going to call your night Sonic Cathedral, you might as well hold it on consecrated ground. Billed tongue-in-cheek as The Night That Celebrates Itself, Sonic Cathedral is in thrall to that scene of blissed-out fuzziness infamously known as “shoegaze”, the unfortunate catch-all label applied to a particular kind of band epitomised by Slowdive, My Bloody Valentine and Ride.

Of late there’s been something of a revival, with Sonic Cathedral at its beating heart. And quite rightly, its 21st century proponents balk at the ‘shoegaze’ term as much as their ’90s antecedents did; less about looking down and more about looking up, Asobi Seksu, for one, prefer the term ‘stargaze’.

What’s all this to do with the price of fish? I hear you ask. Well, when you’re named after a spiral galaxy in the constellation Hydra, as M83 are, surely stars, rather than footwear, is where it’s at. M83 these days is a duo no more, since the departure of original member Nicolas Fromageau. Co-founder Anthony Gonzalez’s ensuing electronic solo project might easily have become less than half of a whole, but this year’s Ken Thomas-produced fifth album Saturdays=Youth has instead seen M83 grow to become something like a band – and be treated like one. Tonight is time out from tour support with Kings Of Leon and ahead of a North American support slot with The Killers.

In front of lights that might have been secreted from a Tandy closing down sale, Gonzalez takes to the dais of the atmospheric St Giles-in-the-fields for some suitably cosmic, analogue keyboard-centric music of a sort that recalls Murcof rather than Slowdive. Vocals, at least initially, are banished as piano plinks, bloops and plonks and languid, infinite notes of synth fade in, sustain, fade out.

Some 10 minutes into this galactic soundtracking, the Antibean’s bandmates find their way past instruments to join him; Morgan Kibby on second keyboards and vocals opposite Gonzalez, Loic Maurin lodged behind perspex screens on drums and Pierre-Marie Malini on bass, with Gonzalez swapping keyboards for guitar here and there.

Saturdays=Youth material then dominates. Skin Of The Night, We Own The Sky and Up! give Kibby the chance to unleash her vocals into the soupy noise, allowing Gonzalez to lurk amongst his instruments rather than be the obvious focus. Despite the stadium dates, this current set-up is resolutely not about the crowd-pleasing theatrics of front man engagement.

Gonzalez doesn’t play his set for applause. Where other bands would gear their set for their audience, here cosmic synth FX and drums frequently kick in just as claps and whoops begin to emit from the attentive pews. Nor is there much chance for singalongs to the English lyrics, with Gonzalez and Kibby sticking to the shoe… sorry, stargaze vocals template of whispers over speaker-blasting reverb.

Like much of the early material, the guitar-led wig-out of A Guitar And A Heart is reinterpreted in the light of the current band’s set-up into something bigger and it sounds like a signature piece – indicative that M83 are more than an electro act. Later songs lack its oomph, even those replete with hooks like current single Kim & Jessie.

But material with a beat to it is saved till the very end, with Saturdays=Youth’s standout and first single Coleurs souped up with crashing cymbals and extended, DJ-like crescendos. Gonzalez departs down the nave and into the night sans encore as the band finish up the set’s most obvious nod in the direction of Depeche Mode and New Order, leaving the suggestion that perhaps this is the reason why M83 have suddenly become the favoured support act for stadium rockers everywhere.