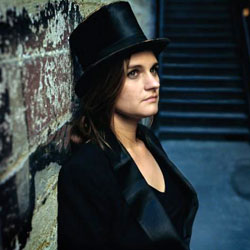 Enigmatic songstress Madeline Peyroux paid her first visit to the Royal Festival Hall as partof the London Jazz Festival and wooed the audience with effortless style.

Fingeringher bowler hat, like a child with their comfort blanket, she drew us closer,creating an intimate aura in the large auditorium. Her easy, laidback air fither assertion that tonight the set would be “pared down to the essentials”.

Slow,seductive, poignant and free, Peyroux’s voice fluttered above the jazz-flecked,folky sounds of the quartet in a set stuffed with boozey, bluesy lyrics bothFrench and English.

Most songs were familiar to fans as they came from olderalbums; unusual, considering her latest, Bare Bones, came out just in April.Perhaps the lady is still shy about performing those new numbers; numbers which are mostly original and made for her.

You Can’t Do Me and happy,break-up song I’m All Right weresurefire hits. The one other “happy song” she promised was swallowed up in the sadsong shuffle. Dance Me To The End Of Love still sounded fresh, and a cover ofI’ll Be Seeing You, delivered with her trademark dreamy approach, workedbrilliantly. Mostly notable for the step-up in tempo and echoes of BillieHoliday, I Hear Music also received great applause.

However,overall the programme was a pedestrian affair. No one who knows Peyroux’smelancholic mode would expect fireworks, but the music trundled along, socasually, so close to lullaby as to be somnambulistic and started to feel indistinct.There were no flares of subtle virtuosity, no sparks from dulcet improvisations, nor much fun to be had in the show at all. The band’s light and languidcollective personality seemed less elegant than remote.

Similarly, Peyroux’soccasional interjections were simple and amusing, but none were memorable orrevealing. It seemed a shame that this singer, who tells a thousand talesthrough her music, omitted the remarkable anecdotes she must have saved up,whether from her time busking in Paris or going AWOL from her label. Sheretained her mystery, but by not opening up and becoming more personable sherisked being frustratingly anonymous on stage.

There wasone moment of striking stage management where Peyroux and the band recreated ascene from her time as a street artist. The mood briefly shifted to a nostalgic romance during the performance of Bessie Smith’s Don’t Cry; thehistory, the story, the loneliness became incredibly tangible. This is wherePeyroux’s great opportunities for understated showmanship lie.

She left as enigmatic as she’d arrived, a fine complement to a successful London Jazz Festival year.