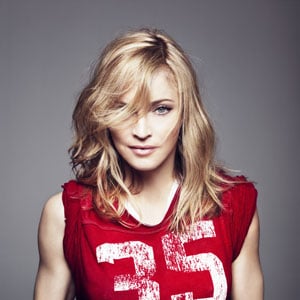 Madonna fans, it must be said, willingly put up with a lot to see their Queen of Pop. £77 buys a view in a crush behind a metal barrier miles from the stage. Upgrade to £137 and you get to join the ‘golden circle’, a vast space at the front where it’s at least possible to see her, even if the feeble volume-limited sound in Hyde Park means much of the wow factor that should be present at such a premium priced gig is sadly lacking. Maybe she fancies bagging a world record for highest grossing tour.

Given that this production is in support of recent album MDNA, it’s reasonable that Her Madgesty should wheel out a set sporting most of its tracks; as such, it should be noted that at no point was this tour billed as a Greatest Hits experience. Consequently the first four songs are from the new album, opening with Girl Gone Wild, which strikes up after what looks like a gaggle of The Emperor’s Royal Guards mess about with a giant swinging gold urn from which smoke emits. The stage rises and falls impressively from then on, Madonna descending from a confession box and deftly hopping and skipping from platform to platform.

Curiously, some of what follows resembles a live action video rather than a show. Gang Bang’s impressive athletics and set-piece gun toting play out against a backdrop made to look like the inside of a house. It works better on the big screens at each side of the stage than on it. There’s so much leaping and jumping – Madonna gets dragged around the stage by her dancers at one point, one of whom star jumps over her – that it’s unsurprising to find the vocals are unremarkable at best and auto-tuned to oblivion at worst. At Gang Bang’s end she commits the evening’s first murder and slings her gun away.

Of the oldies, Papa Don’t Preach gives way after just a couple of verses into Hung Up, which loses its Abba sample on which it hinges. Express Yourself is dusted off early on and spliced with Lady Gaga‘s almost identical Born This Way; “She’s not me,” insists Madge, as if anyone had somehow conflated the two Italian-American divas. Later on, Like A Virgin is wheeled out, but in a slowed-down, joyless waltz form. None of these changes improve the material. In contrast, Like A Prayer is left largely unreconstructed, and is glorious for it. But aside from snippets stuck together in an ineffectual medley, there’s no Ray Of Light, no Frozen, no Holiday. Anyone expecting a Greatest Hits tour should’ve known better. But the occasional rain doesn’t help to lift spirits which are, well before the set’s midpoint, rather dampened.

More from MDNA followed; I’m Addicted, one of the Benny Benassi produced bangers on the album, seemed rather out of place outdoors, lacking the immersive clubland quality its lavish production affords it on the record. The album’s two most MOR tracks, Give Me All Your Luvin’ and Turn Up The Radio, were quite lost in the saggy middle of the set, while the plodding Masterpiece, from her W.E. soundtrack, dropped energy levels still further. Celebration – a track hardly amongst those one would pick to end a Madonna gig on – feels uncelebratory and superfluous at the show’s end. Given the reimagining of several of her biggest hits, the preposterously low volume and the English summer’s best efforts, it closed a gig that lacked oomph throughout.

There’ll always be an appetite for big-budget blockbuster tours, but increasingly the people who can afford to pay Madonna the sort of ticket prices she expects as her due will want far more focus on the music, the setlist and the sound – and on whether they can see her – than on whether she can still bend and flex like a woman half her age, or whether she’ll ‘controversially’ expose a buttock or two. Power to her arm that she can do all these things, but for the sake of her fans she urgently needs to refocus on the thing that made her the legend she is in the first place – her music, and how she presents it. Fixtures and fittings can be elaborate to the point of insanity, if the foundations are solid. On this evidence, Madonna is on shaky ground.