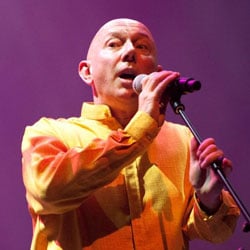 One of the more welcome groups to recently hit the congested comeback trail are Magazine, back together after splitting up 28 years ago.

Among the first post-punk bands, who helped to pave the way for the electro acts of the 1980s, Magazine – like many other cult artists – were much more influential than their lack of commercial success would suggest, with fans like Radiohead and Morrissey covering their songs.

Mixing avant garde with pop, their use of spiky guitar and atmospheric synths, and elliptical but evocative angst-ridden lyrics, created a distinctively brooding, even sinister, ambience.

Magazine have also joined the growing trend of playing an entire album live. At their initial reunion gigs earlier this year they performed their first two albums Real Life and Secondhand Daylight. The first half of this Royal Festival Hall gig called “The Soap Show: Episode 2009” is a track-by-track reprise of their third album from 1980, The Correct Use Of Soap, with song titles displayed on a screen.

But this is not so much a nostalgia trip down retro road as a postmodern ironically self-reflexive take on their own vinyl past. In between songs frontman Howard Devoto reads from a hilariously po-faced old manual on how to look after your records. After the first five tracks have been played he indicates that the album is being turned over on to Side Two. Later a revolving crackly needle sound signifies the intermission. Magazine’s penchant for arty portentousness has always been undercut by tongue-in-cheek humour.

Devoto devotees will be delighted that he has returned to music after time out managing a photographic agency archive. He may now be shaven headed and a bit thicker round the waist, but his stage presence still impresses as he moves in his characteristically jerky way and chats to the audience with dry wit, while his noticeably deeper voice sounds strong.

The band certainly show their music has stood up well. Beginning with the edgy paranoia of Because You’re Frightened, highlights include the sadomasochistic I’m A Party (“I will let you hurt me/Because I know it hurts you”), the melodically moody neurosis of Philadelphia, their offbeat funky cover of Sly And The Family Stone‘s Thank You and the catchy, danceable single A Song from Under the Floorboards.

The second half begins with Formula playing a gothic-style solo on the in-house organ, then accompanying Devoto’s mock-pulpit spoken sermon The Book about a man arriving at the gates of Hell, before going on to earlier Magazine songs.

While they applaud each song respectfully, the near-capacity audience’s enthusiasm is somewhat subdued in the sedate classical surroundings of the RFH, but the atmosphere livens up after Devoto says “You don’t have to sit down, you know” and most people rise to their feet, and even dance to the music’s choppy rhythms.

The classic debut album Real Life is represented by Parade, a subversive cabaret with lush grand piano from Formula, the epic The Light Pours Out of Me, with its persistently staccato drum beat, and the strangely compelling Definitive Gaze. Secondhand Daylight, the more experimental second album, features the punky Rhythm Of Cruelty and the disturbingly sexual Permafrost (“This is now an environmental song,” quips Devoto).

Disappointingly the final encore is the lesser-known single Give Me Everything rather than the classic Buzzcocks-esque single Shot By Both Sides, the nearest thing Magazine had to a hit, but the band is cheered off.

As their live concerts have been so successful, no doubt Magazine will be back for more before too long – next time performing their final album Magic, Murder And The Weather, perhaps?