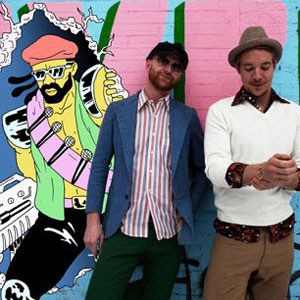 It’s been three years since producer dons Diplo and Switch broke cover with Major Lazer’s dancehall-derived debut album Gunz Don’t Kill People… Lazers Do. Three years of wildly ravey Notting Hill Carnival appearances, a pair of EPs, world tours and a smattering of singles and remixes have been and gone, as have live vocalist Skerrit Bwoy and, most recently, Switch himself.

The project has, it seems, not yet run its course, for a second album is imminent, heralded by a free to download track – Get Free – breaking cover ahead of tonight’s gig. But is Major Lazer now little more than a Diplo solo project? And how does an act seen only sparingly at event gigs transfer to a standard venue such as this venerable old theatre?

After a commandingly colourful support performance from Toddla T, who brought along Shola Ama as one of his vocalists, Diplo takes to the stage and installs himself behind a desk of party gadgets – a laptop, a CD player and little that was recognisable as an actual instrument. A pair of striking dancers flail on to play about in the space in front, and Switch’s replacement of sorts, Jillionaire, divides his time between standing behind the desk and indulging in a spot of MCing, alongside Walshy Fire.

From that moment it does not let up. Genre-hopping beyond the dancehall-ragga territory, with some tribal moments and a souped-up outing for Azealia Banks‘s ubiquitous 212, the rich and frantic whirl spares little time for recognisable material from the first album during the first 20 minutes. New songs come, are chopped up, vanish and return, spliced with samples and full tracks. The MCs variously command the up-for-it audience to “JUMP!”. There are no singers; what singing vocal parts do exist are dropped in and snatched out by Diplo as though in a DJ set.

None of which matters at all. Major Lazer sets, whether replete with poledancing robots – as they were at the Carnival – or gyrating, booty-shaking real life girls – as here – have always been about movement, the energy it creates and the grins that result. That energy tonight creates a crackling atmosphere. But, leaving nothing to chance, the troupe have brought with them props to assist the party; giant beach balls bounce into the audience and ticker-tape cannons fire forth their contents, while the MCs fling water over the sweltering crowd.

Shirts are bidden off at one point; the command is obeyed and the Empire thrills to the sight of sodden t-shirts spinning above glistening bodies. Diplo, until now snappily in a black suit and white shirt like an investment banker trying his hand as a hit man, sets a credible example by parting company with both his jacket and shirt; the venue at this point is less Victorian theatre and more beach rave.

Whoops go up for Pon De Floor; ladies are invited on to the stage to gyrate and shimmy, once over a prostate chap who looks like he’s enjoying his luck; Jump makes an early appearance and cranks up the energy still further; Diplo somehow clambers about atop his desk without tripping over any of his gizmos; Walshy Fire appears in front of us on the dress circle, spotlit. And it all ends up with a spot of Toots And The Maytals, memorably returning the music to its roots. Major Lazer’s party is just getting started.