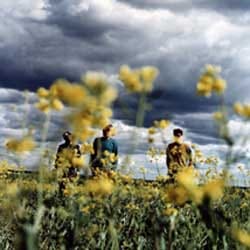 ‘Male Bonding at the Relentless Garage’ may sound like a somewhat outre night out, but in reality this gig is as straightforward as it gets. A London trio – expanded to a quartet for tonight – they play loud, melodic, mostly speedy noise pop indebted to Dinosaur Jr, Buzzcocks, Superchunk and, whisper it, Ash. It’s the kind of music that’s the lifeblood of London’s small-to-medium live scene.

That’s not to say that Male Bonding’s music is simplistic. Their songs are far more complicated than they might seem to the bar loiterers. Epic opener Bones – one of the few Male Bonding tracks to stretch beyond the four-minute mark – could be the work of a shoegaze band, although its yearning harmonies betray the band’s poppy leanings. Elsewhere T.U.F.F. slots in some Afrobeat-esque percussion between its meathead riffage, while the keening Year’s Not Long could reduce a grown man to tears, if that grown man wasn’t too busy headbanging.

It’s a shame, then, that the subtleties and textures tend to get lost in The Garage’s soupy sound. Not that it’s fatal to the audience’s enjoyment; Male Bonding’s songs – even when heard in soft focus – are still visceral enough to engage the crowd. And although the venue is far from full, resistance in the face of recklessly sped-up pop-punk bangers like All Things This Way, Pirate Key and Crooked Scene, mean that there are eventually just about enough flailing bodies to allow a spot of low-temperature crowd-surfing.

The band only falter when they slow things down. On record, Franklin is a sweet, relatively quite interlude that could be the work of a chillwave act. Live, however, it’s cumbersome and provides all but a monetary incentive to go to the bar.

Male Bonding write good, occasionally excellent songs, but they’re also a British act who sound American. As such, it’s unlikely they’ll ever play venues much bigger than this – in the UK, at least. This is both a blessing and a curse, because some of their music might be stadium-worthy, but it’s still best heard in beer-soaked, cramped conditions.