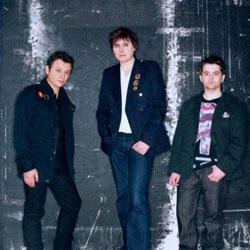 If there is a theme to this evening, it would have to be betrayal.

What other way is there to describe the annual awards show of the NME – once the indie bible, now lumbering towards being little more than a corporate brand itself – taking place in the o2 Arena, a sanitized, anodyne boil located within spitting distance of the accountants and financiers of Canary Wharf?

This is indie rock’n’roll re-imagined in a 1980s boardroom by pin-striped yuppies who see only the marketing possibilities. Do they even care about the music? If this is what Richie James Edwards saw coming, no wonder he couldn’t bear to face it.

The o2 Arena is a venue at whose doorstep Duran Duran should arrive in a yacht, dressed in Armani suits. It is not a venue fit for a band who claim to hold communism close to their chests.

Exhibit One: the glistening, polished approach to the gleaming, chrome and glass dome is utterly devoid of touts – there’s zero tolerance of grey areas of the law here and little tolerance of general loitering. Exhibit Two: entrance depends on airport-level security, and once inside, pre-gig refreshment consists of wine and tapas. Unless you’d prefer Starbucks, of course.

Is all this worth the compromise it entails? Even to see The Manic Street Preachers be crowned Godlike Geniuses? After all, it’s not as if we need the validation of some capitalist whores to know it’s true.

First impressions confirm that of course it’s all worth it. The Cribs! And Johnny Marr! When this is the bottom of the bill, how could anyone resist staying for more, even as Ryan Jarman taunts us with reminders that this is a ‘million pound venue’, twisting the knife a little deeper into our bleeding indie heart.

Next up is another betrayal, this time by Klaxons. Abandoning the flouro sported by their glowstick waving minions, they arrive on stage dressed as black-clad monks, like the Emo anti-Klaxons from a comedown nightmare. If only Jamie Reynolds had asked some real Emo kids about waterproof guy-liner though.

Without this sage advice, he looms across the giant screens like a Frankenstein panda as the band shoot through a greatest hits set that opens on Atlantis To Interzone and ends on It’s Not Over Yet. Musically, they are of course brilliant, glowing in the dark whatever they’re wearing. The vast expanse of the o2 lends them a more bassy, echoey sound as the strong whiff of a jazz fag coming from the row behind me gives hope that all is not lost. Yet.

Next up we have Bloc Party who seem remarkably cheerful. Kele Okereke even engages in happy banter with the audience (though at times he does sound as if this is coming through clenched teeth). Their set is accompanied by the best light show of the night.

It’s hard to decide which band are the audience favourites tonight – Bloc Party or Kaiser Chiefs– but whichever it is, there’s no doubting that Ricky Wilson’s (off)stage antics more than make up for the fact that his band are really nothing more than a half-decent pub act. Tonight, dressed as Josh Homme for reasons known best to himself, Wilson stage-dives, crowd-surfs, runs along the barrier in front of the seats, and seems to spend as much time in the audience as he does facing it.

When he does manage to stay on stage long enough, he has the confidence and gumption to throw new material in amid Ruby, I Predict A Riot, Modern Way, Oh My God and most of the other usual suspects. He’s a true showman, and for that we’ll let him off everything else.

By the time the Kaisers finish, the Arena is beginning to thin out. God forbid the audience misses the last train home and doesn’t get the eight hours sleep required to put in a good performance at that 9am meeting or sixth-form college tomorrow. What way is this to treat the Manic Street Preachers?

Undeterred, the Manics arrive in the style we’ve come to expect, preceded by five minutes of The Pipes and Drums of the London Scottish, who are well-received by the audience and peel off to appreciative applause and returned salutes.

And then it’s the main event – this year’s NME Godlike Geniuses. It’s a celebratory event, filled with special guests (although the language that should be used to describe the mere idea of that stunted Jam-plagarising hobbit Tom Enemy standing in a place that once belonged to Richie cannot be printed), a career-spanning set list and a sense of worshipping at their own altar. Faster’s lyrics flying around the stadium on electronic boards is a special highlight.

Elsewhere we’re treated to Motorcycle Emptiness,You Love Us, Everything Must Go, If You Tolerate This… and many others. They’re joined by Cerys Matthews,as if the Welsh flag draped across the stage alone isn’t enough to remind us of their national pride, and it’s impossible not to be infected by the pure joy emanating from Nicky Wire as he pogos through a cover of Rhianna’s Umbrella, his “favourite song of last year”.

Wire starts the evening in blue military blazer and skinny white jeans, a feather boa strung around his microphone. Before long, he’s abandoned the jeans to reveal flowery boxer shorts and knee-length socks. And unlike Klaxons, his make-up lasts the course.

On the screen behind him, we see him younger, more beautiful. And we see Richie. But, facing the audience, the Manic Street Preachers never look back. They sound sincere in their appreciation of the support and recognition the NME has given them, and finish in a blaze of glory on a triumphant version of Design For Life.

Is all of this right? Is it really proper? Should we just grit our teeth and remember that this been an excellent night, filled with great music despite the corporate branding that looms over us? I feel dirty, as though I’ve somehow compromised all my principles by coming here.

As we file out in the cold February night, past stalls selling t-shirts emblazoned with Working Class Hero, the feeling can’t be shook that while someone has compromised their principles tonight, it’s not the headliners. They’re incapable.