by Helen Clarke
published: 17 May 2016 in Live Music Reviews
Tweet 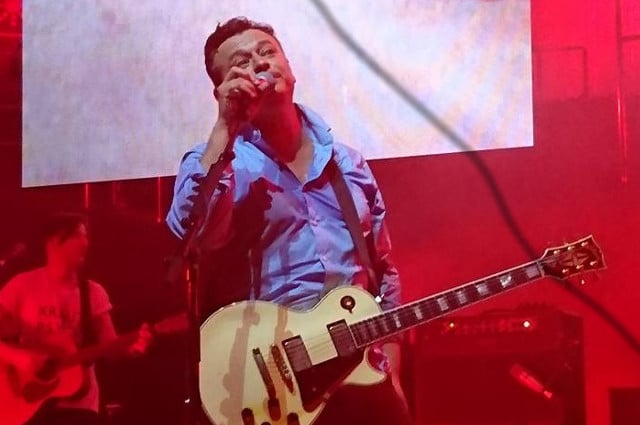 Everything Must Go was a game changer for the Manic Street Preachers. Released at the height of Britpop, their fourth album was distinctly different to its predecessors, and for good reason.

It hit the shelves two years after co-lyricist Richey Edwards’ disappearance; an event which would have a profound effect on any band. For this record, the spray paint, military clothes and leopard print were packed away and their sound, while fluid across their previous records, was more focused, tapping into the guitar-anthem sound of the day. It catapulted them into the mainstream.

Tonight’s show – the first of two at that most anarchic of venues, the Royal Albert Hall – marks 20 years since all of that, and it’s fair to say that the band are enjoying looking back . They play two sets; first, the entire album in order, and then a collection of hits. The former is something really quite special. Those songs long neglected as MOR radio-fodder are given a new lease of life; played together, in their intended order, they paint a picture far greater than the sports-stadium, beer-waving association of many of its best known tracks.

Tonight, A Design For Life is again an anthemic tear-jerker that sees the hall – and many of boxes and stalls that climb the walls of the venue – swaying in unison, rugby shirts and feather boas alike. The Girl Who Wanted To Be God – “What you get if you mix ABBA’s Dancing Queen, Richey Edwards’ cheekbones and the poetry of Sylvia Plath”, according to bassist Nicky Wire – is a lost disco-infused indie club classic; and James Dean Bradfield’s acoustic Small Black Flowers is spine-tingling.

Wire is on particularly good form. Beaming from ear to ear, he introduces live rarity Natwest-Barclays-Midlands-Lloyds, by spitting out a list of long-dead London toilet venues the band played early in their career, before quipping: “Even all those years ago, when people laughed at us, we knew what the banks were up to.” Gazing around his grand surroundings, he muses: “This is working class empowerment.”

They throw more and more into it as the set progresses. As Bradfield hurtles about the stage, leaping from amps, we’re treated to a particularly venomous Roses In The Hospital and You Love Us. Your Love Alone and Walk Me To The Bridge represent their millennial back catalogue; a rare cover comes in the form of Fiction Factory’s Feels Like Heaven, before they sign off with If You Tolerate This Your Children Will Be Next.

Everything Must Go has a curious place in fans’ hearts; would a hardcore Manics fan list A Design for Life, Australia and Everything Must Go as the band’s best work? Usually they’d be more likely to scoff at the air-punching festival crowd singing along, but tonight those songs were well and truly dusted down. It might be two decades old, but tonight Everything Must Go sounded youthful and exhilarating. As Bradfield put it: “Call it Britpop, call it whatever the fuck you want – it was ours.”