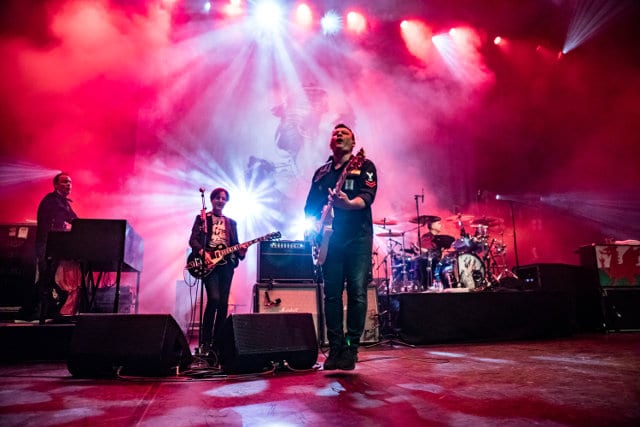 “You’ve been amazing – considering all these seats we’ve had to contend with,” enthuses a visibly satisfied James Dean Bradfield before signing off for the night. It’s a fair observation – because even after all these years, and with the band’s constituent members all now pushing 50, the Manic Street Preachers command a raucous crowd.

Despite its seats, the Royal Festival Hall is an aptly grand setting for a band whose gigs always feel like greatest hits sets nowadays, so strong is their back catalogue. Tonight’s show, part of the Robert Smith-curated Meltdown festival, majors on this most recent album, Resistance Is Futile, along with some old favourites, and the inbetweeners generally given a wide berth.

A wash of red light sweeps the stage before they arrive, gradually revealing a huge reproduction of the cover art to Resistance Is Futile. At this point fans are holding their breath, waiting to see if Nicky Wire will walk out – the left hand mic stand is ominously feather boa-free. He’s missed recent shows following the death of his mother, so when he strides on to the stage clad in shiny silver trousers, offering a wry wave to the crowd, he gets a momentous cheer and it’s straight down to business, starting off with album lead, International Blue.

The stirring guitar of Motorcycle Emptiness gets an early look in, perhaps scheduled second in a nervous bid to inject atmosphere into the venue. But they needn’t have worried; from the arms waving from the boxes stacked up the side of the venue to the mob who instantly abandon their seats to crush to the front as soon at the lights go down, the crowd are tuned in straight away.

There’s an impenetrable sense of community at Manics gigs; from the feather boa-wearing hard core to grown-up indie kids, they will the band along like old friends. The feeling persists through an obligatory and rather brilliant Cure cover, Inbetween Days – in deference of course to Meltdown 2018’s curator – to Bradfield’s solo acoustic version of Faster, the sneering guitars replaced with glorious fat, chunky slabs and a near falsetto chorus. And of course, the venomous retort of You Love Us, which to this day, over 25 years after its birth, still elicits a brattish spitting of lyrics between band and fans. 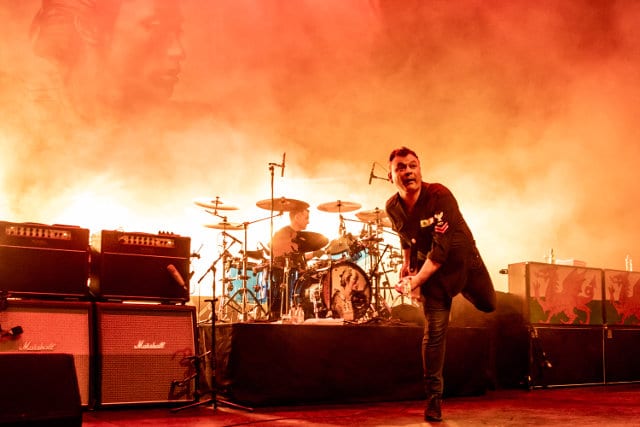 The significance of being invited to play by Robert Smith isn’t lost on the band; Bradfield explains that they secured Mike Hedges to produce their two biggest albums, Everything Must Go and This Is My Truth Tell Me Yours, after hearing his work for The Cure and asking him to work on The Holy Bible – “He told us we were a bunch of gobshites but he liked us.” Meanwhile, in between stalking and twirling around the stage as only he can, Wire talks of crimping his hair to be like Smith “back in the day”.

Support act The Anchoress reappears for Little Baby Nothing and new album track, Dylan And Caitlin. Elsewhere, Hold Me Like A Heaven, a song about Nicky’s mum, feels especially poignant, but Slash And Burn falls slightly flat. It’s at this point the absence of any political rant becomes apparent. It’s interesting, give the day’s news about the shocking detainment of children in the United States, that they keep schtum. In fact, despite their most recent album’s title, Resistence Is Futile, born during such turbulent political times, it’s a mostly personal record.

They end with Design For Life, and of course it goes down a storm. As he leaves the stage after everyone else, Bradfield seems genuinely touched, repeatedly thanking the audience before chucking his plectrum into the crowd. Despite any misgivings the band may have, and their relatively apolitical stance of late, it’s hard to imagine a time when the Manics won’t sound and feel vital.