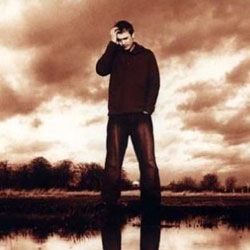 The critical success he’s enjoyed in the past couple of years seems to have taken James Chapman – the disarmingly shambolic one-man band who makes up Maps – completely by surprise. Or at least that was one of the explanations that occurred as he arrived onstage at Cargo unsteady on his feet, gurning like the Balearic headcase his music sometimes evokes and dispensing a bizarre line in between-songs chat (of which more later). He was joined by one other musician, who took on extra keyboard and laptop duties.

Maps’s euphoric electropop is probably better suited to sunset on a beach somewhere than a cold Monday night at Cargo, and the first few songs struggled to hit the finely wrought high that Maps is capable of. “We don’t really have any monitors,” slurred Chapman, which probably explained the muddiness of the sound.

Or did it? There was speculation that he was off his face; but others felt this was unfair, pointing out that Chapman is “a bit eccentric”. He doesn’t look eccentric, though – he’s your average bloke, in jeans and a hoodie, performing to a crowd mostly made up of men who looked just like him. From the mix of ’90s-skewed inspirations that make themselves felt in Maps’ music, it’s clear that shoegaze has been more sartorially inspiring than techno.

Chapman has never been one for the most emotionally laden performances, but tonight he was at new levels of abstractedness. Was he even in the room? His otherworldy state made for a strangely anxiety-inducing experience – one felt like an overprotective mother watching her darling struggle through recorder choir, except that in this case the sound was less Greensleeves and more like something from the dreamy intersection where Spiritualized and New Order meet and shuffle around trying to avoid each other’s eyes.

As the set picked up pace and the technical problems seemed to ebb, if not disappear entirely, the music at last overwhelmed the patchy delivery. Things had improved by the third song, the lovely You Don’t Know Her Name from Mercury-nominated first album We Can Create, followed by current single I Dream of Crystals, proving that material from the new album Turning The Mind can stand comparison with earlier songs.

Despite some worrying introductory chat – Chapman wondered if anyone in the crowd had ever dreamed about murdering their ex – the next couple of songs were in the same dreamily euphoric vein. And then, and then…

Performers are often under pressure to come up with all sorts of brilliantly witty observations between songs, but some can win a crowd over by talking to them and others can’t. And those who can’t, probably shouldn’t try. This principle is always true, but Maps went the extra mile in proving it once the electropoptastic Die Happy, Die Smiling faded away, launching into an agonisingly self-revealing and completely unnecessary apology for the bad sound and the inadequacy of his performance.

“My mum and dad are here… I’ve been a terrible son…” he told us, until some kind people in the audience started yelling out, “That’s enough!” Being told to shut up halfway through a speech is usually a sign that you’ve lost your listeners’ sympathy, but here it was evidence that, despite the technical problems and the air of chaos, the crowd’s sympathies were with the hapless Chapman. From then on, we were all kind of in it together.

Warned or reassured, Maps plunged back into the music, pulling a crowd-pleasing Back And Forth out of the bag. The brace of trance-infused songs that closed the short set, Let Go Of The Fear and Love Will Come, prove everything that is good and bad about Maps: utterly loveable, swirling enthusiasm versus a bit too much of a sweet tooth when it comes to bangin’ repetition, droning synths and cheesy lyrics.

A final song tacked on the end was unrehearsed, Chapman explained, but funnily enough it was one of the simplest, straightest performances of the night. “It’s got nothing to do with Valium – it’s a metaphor for love,” he announced, before diving into Valium In The Sunshine. A pleasant glow descended on the faintly traumatised crowd. Here’s hoping Maps’s mum and dad were proud, after all.