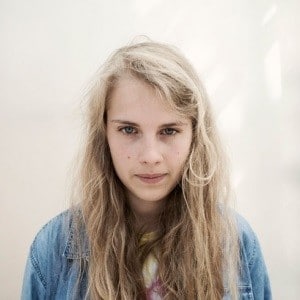 Despite headlining gigs up and down the country these days, Marika Hackman is not especially enthused by being in the spotlight. Bush Hall is absolutely packed and the audience erupts in cheers as she first walks on. In return it gets a slightly awkward “hello”, as if she’s not really supposed to be there. “I always feel like a fraud when I get applause before I even start. I feel like I should jump through a hoop of fire… or at least wear a dress,” she says. She later jokes that she looks like she’s wearing pyjamas.

Luckily this reluctance to show off makes her all the more alluring and authentic. She’s often referred to as a kooky folk girl. What Hackman actually specialises in is a very dark sort of pictoral folk, painting bleak, unsettling and luxurious pictures, which stay with you long after they’ve finished. But that’s not what hits you first; that’d be her voice, which is genuinely haunting. She’s had a tonne of references thrown her way – Nico, Marianne Faithfull – and the similarities are undeniable. Paired with the right songs she’s utterly absorbing.

Tonight, she tells us, is the first time she’s played with just strings – a cello and violin – and while barely audible in places, where they do break through they’re a welcome prop, adding a coat of the polish that distinguished her recent, debut album, We Sleep At Last, from the earthier sound of her EPs. Animal Fear – which this evening sounded almost triumphant, with Hackman shrouded in colourful light, reflections from the venue’s glitterball skitting around – benefitted especially.

If there’s one song that acts as her perfect ambassador, offering a glimpse into her world, it’s got to be Monday Afternoon, a reworked version of Here I Lie, a staple of her earlier repertoire. A spooked fairytale, it follows a couple whose eventual demise comes in the woods… “The forest floor is my bed, the leaves I use as a blanket…breathe it in, the sickly sweet of my rotting skin…” it’s beautifully eccentric, with a dash of sixth form poetry thrown in.

Elsewhere we’re treated to a cover of Joanna Newsom‘s 81, her first single You Come Down, Claude’s Girl – a lullaby based on Debussy’s The Girl With The Flaxen Hair – and an encore of fan favourite Bath Is Black.

This is one of her biggest shows to date; so far she’s been more used to teeny venues where her audience is within spitting distance, and it makes quite a difference. She thrives on the intimacy of her shows. But tonight, as the set progresses, some of the album tracks merge into one and begin to drag slightly – thanks in part to acoustics that don’t play to her advantage, meaning it can be hard to remain fully engrossed in her words. But as her audience continues to swell, she’d do well to add to her no frills approach, giving the set some more structure and direction, put on more of a show. In the way that she’s grown into her sound and carved her musical personality; now it’s time to lap up the applause – and maybe even get the firey hoop out.