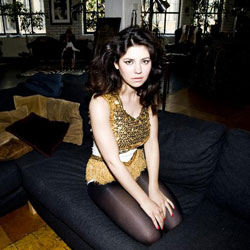 Sanderson Presents… is a hook up between a central London hotel and a record label. This is why the courtyard of a raucous hotel lobby bar gently fills with an odd mix of skinny jeaned hipsters and Italian suited industry moguls, drinking 6 beers. A back terrace is reserved for couples on dinner dates. A man resembling Boris Becker stays on his mobile throughout.

Wolf Gang, a charmingly Elvis Costello-bespectacled young man named Max McElligott, takes to the stage – a piece of floor, at the front, with a mic.

His quirky, lilting pop slices have drawn comparisons with David Byrne and Peter Gabriel. With just an acoustic guitar and his clear, youthful voice, songs like Lions In Cages and first single Pieces Of You take on an elegant and gently plaintive edge, accompanied prettily by the plishing of first raindrops on the courtyard water feature.

The audience shuffled closer together around the enclosed edges of the courtyard as the rain gathered enthusiasm. After an interminable wait, lightning across the partial glass roof and an apocalyptic downpour, Marina took her place at her keyboard. Rain-related sound problems prolonged the wait further but eventually, a now dark courtyard was treated to Obsessions, sweet lamently post-sex anxiety and relationship dysfunction.

The arrangements of the first few songs, Marina alone with her keys, are simple and plinky. This showcases her real instrument: an incredible voice, of great strength and range, which she trills and trembles and throws around. Tremulous, cracked lines which would sound hokey from a less accomplished singer are here one facet of an impressive vocal arsenal.

Over a set of just six songs, two of “the Diamonds” join Marina – pouring more confusion on her assertions that she is not a band and that the Diamonds are in fact her fans. It is when Nick the drummer joins her (on guitar) and Pete takes the mantle of the keys that Marina really shines.

In a skintight, short black mini dress with neon paint splashes, she stands inches from the crowd to sing Mowgli’s Road, a strange bubbling, fizzing effect on her voice in place of the animal sounds on the track. Marina is a chatty and scatty converser between songs – at complete odds with the persona that emerges while singing: controlled and sultry, with huge concentration lavished upon that astonishing voice.

Her biggest performance comes during the one cover of the night. With a sprinkling of irony, it is What You Waiting For, Gwen Stefani‘s self-help number about a popstar confidence crisis, that provokes Marina’s most assured offering. Gwen’s version is a startling, hectic assault of a song, and perversely difficult to sing. Marina matches the vocal flourishes flawlessly, using the acoustic setting to make this crazy song the perfect set piece for her voice.

Two new songs settle into her set comfortably, but it is closing number and lead song from her EP, I Am Not A Robot, that manages to make even the blithe industry bigwigs shut up and put their phones away. She defiantly points out her humanity, the dexterity of her voice backing up her claim. An unusual and impressive performer, transcending her bizarre surroundings.