by Jenni Cole
published: 4 May 2010 in Live Music Reviews
Tweet 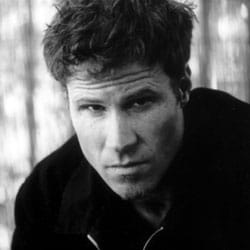 The older Mark Lanegan gets, the rougher his voice sounds and the more perfectly it suits the dark, dry desert blues lyrics of the songs it serves up. The fan boards may be moaning that he didn’t sound at his best, but we beg to disagree: this was a tour de force improved by sandpaper growls rather than diminished by them.

The Scala, a small, slightly grubby venue in the grubbier end of Kings Cross that cowers beneath the shiny future of new high-speed rail links, was the perfect venue for this run-through of his best tunes from the past two decades (with a few favourite oldies thrown in for good luck). A grunge survivor who has grown into the bittersweet songs he graces us with, tonight Lanegan showcases not only why he has lasted so long but also how much he’s improved with age.

The evening was very much a career retrospective, with no attempt to thrust new material down the throats of the faithful, nor to give much space to music made with his collaborators of the past half-decade Isobel Campbell or Greg Dulli. Instead, alone but for a second guitarist accompanying, music from his solo albums is recreated at its most pared down and raw alongside old Screaming Trees numbers such as Where the Twain Shall Meet, through the folk covers of his 1999 album I’ll Take Care of You (including Shiloh Town and On Jesus’ Program), to a fair smattering from 2004’s Bubblegum (When Your Number Isn’t Up, Like Little Willie John and 100 Days), his final and most successful solo outing before hooking up with Campbell.

It’s a crowd-pleasing set aimed at an audience made up of the faithful, and hits the mark accordingly. From the opening bars of One Way Street to the main set closer On Jesus’ Program, he switches from minimalism to fuller, guitar-driven riffs, switching between the tenderness and anger that remains grunge’s most enduring trademark, undercut with a delicate beauty and slashed raw by lyrics shot through with despair.

There’s no doubt he’ll coming back for an encore, though perhaps at five songs it’s better described as a second set and perhaps a tad self-indulgent, but we’ll let him off for not being able to stifle a laugh when a fan asks him to smile before he launches into Misirlou. It included Queens Of The Stone Age number Hangin’ Tree, too.

It’s the second time Lanegan comes back out, for a final run-through of Field Song, that really counts as the encore – a goodbye to fans that might have been genuinely spontaneous, as it wasn’t a feature of previous nights on the tour.

He’s due back in the autumn with a new solo effort, apparently. We didn’t get any of it tonight, which was a clever move. Remind us what he’s capable of and leave us hungry for more. That’s the way to maintain a career into its third decade.