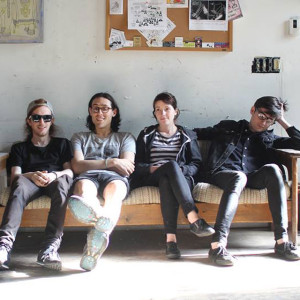 There’s been a slow burning buzz building around Martha for some time now. After releasing a few EPs on their own label, their debut album, Courting Strong, was released by Fortuna POP! last year, and was ravenously received. Their frenzied pop-punk is still winning them new fans and the buzz gathered apace tonight. In fact, it morphed into something else altogether.

The George Tavern is admittedly a small space; the sort of sweaty ‘toilet’ venue fast-vanishing from inner London. But it’s completely sold out. There isn’t an iota of space free, from the bar to the extensive merch’ table and the smoking/beer garden; there are excited indiepop and straight edge punk kids everywhere. The Durham band have lately accrued a new set of fans, who flock to the front as soon as the musicians leave their position behind the piles of records, t-shirts, posters and vegan brownies.

First up however, it’s their label mates Milky Wimpshake, with a set that’s heavy on their upcoming album, Encore, Un Effort! Pete Dale and co are joined by Sophie Evans, who’s been in post since guesting on Without You, on their previous album Heart And Soul In The Milky Way, and features heavily on their next. As anyone familiar with the band will expect, it’s business as usual with this seventh album that comfortably sits alongside everything else they’ve released. Not for them, grand reinvention; it’s packed with daft punk-pop with infectious choruses. However Evans (who, like most of tonight’s crowd wasn’t even born when her band played its first gig) brings a different dynamic to the songs she sings on; a sort of twee sassiness that refreshes the formula.

Dale delivers the new songs with as much snarling sarcasm as those from deep within their back catalogue. Le Revolution Politique, Ping Pong Lovers, My Girl In Brackets and “A cover of a brilliant, brilliant song that I wish I’d written myself”, Heterosexuality Is A Construct – originally by ONSIND, whose members are also in Martha – are great ambassadors for Encore, Un Effort! Elsewhere oldies I Wanna Be Seen In Public With You and a brilliant revved up version of Without You – which see Daniel Ellis from Martha join in rhythm guitar duties – get a look in, to the delight of the indiepop section of the audience, who are temporarily given run of the room.

When Martha finally take to the stage at about 11pm, the whole atmosphere changes dramatically. A surge of energy and excitement that manifests itself in plenty of pogoing, prompts Ellis to issue a nervous warning: “Please…just a reminder to be very cool to each other.”

The star of the night had to be bassist and sometimes singer Naomi Griffin. Never one to hog the limelight, Griffin has really come into her own, and tonight she rules that stage, her high-pitched, affected vocals soaring over the cheers, the tip of her head just occasionally visible between the flapping limbs leaping along to Bubble In My Bloodstream.

The rest of the band have settled into an easy, friendly dynamic, which is fun to watch – they’re one of those bands who don’t play to a crowd, but rather play with them – and the usual live favourites get a look in; Sycamore, Gretna Green, a rousing 1967, I Miss You, I’m Lonely, and So Sad So Sad, which closes their set.

Tonight’s audience feels perfect for Martha, a band who ooze youth and angst from their every pore. Whether they’re bemoaning their boring GCSEs, wanting to swap wendy houses for spud guns or exploring darker tales of diet pills and superglue, they never take themselves too seriously. They’re sort of Milky Wimpshake junior. Mr Dale might be old enough to have fathered the younger band, but the two have more in common than might be immediately obvious. As their fanbase swells, the younger band would do well to follow Dale’s lead, stick to their guns…and keep on being just a little bit silly.