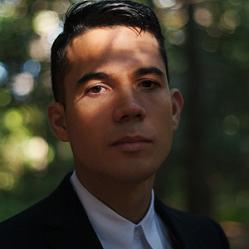 Up until now, Matthew Dear has freely admitted to struggling to project himself in the live environment, but at Fabric the signs were that he is very close indeed to becoming the finished article.

Fabric is a curious proposition as a midweek gig venue, with massive, dormant spaces up above and a heaving huddle of bodies in the corner down below, kept together as if to keep warm. That corner was Room 1, an ideal setting in some respects – underground, dark, and with a stage that brought Dear in to very close contact with his crowd.

Dear thrives on attention, but does not go out of his way to court it. It is secured through charisma, through predictably stylish dance moves and musical gestures that marry with his rich baritone voice. He arches over backwards in the midst of songs, points towards his crowd or closes his eyes tightly, lost in the pulsations of the music. He is in many ways the epitome of a young Dave Gahan, from the slicked back hair and model-like features to the rounded power found low in his vocal range. He could also be seen as the heir apparent to LCD Soundsystem and DFA supremo James Murphy, for although tending to operate at a slower tempo than his New York counterpart he makes darkly romantic music for movement.

His live band deliver their lines immaculately, with a trumpet high in the mix and two percussionists, one acoustic and one electronic, adding body to the already active rhythmic profile. Some of the mid tempo songs chug along with a motoric precision, but with Dear’s vocals are living and breathing machines, the finely crafted bass lines – of which a certain Peter Hook would be proud – the chrome plating on the outside. The lyrics and their delivery are like the blackest of coffee, the darkest of chocolate – highly concentrated but, in their own way, strangely uplifting.

The Fabric set majors on this year’s Beams album, but also includes some treasures from the back catalogue. One of these, You Put A Smell On Me (from 2010’s Black City), has the crowd in a frenzy at the finish, coming as it does after a majestic performance of Her Fantasy, with that immortal line “and it’s one in a million hearts that feels the way, the way I do”. It proves to be the catchphrase that follows us long in to the cold winter night, the seed of thought remaining that Dear can now connect with his listeners directly through lyrics as well as his powerful music.