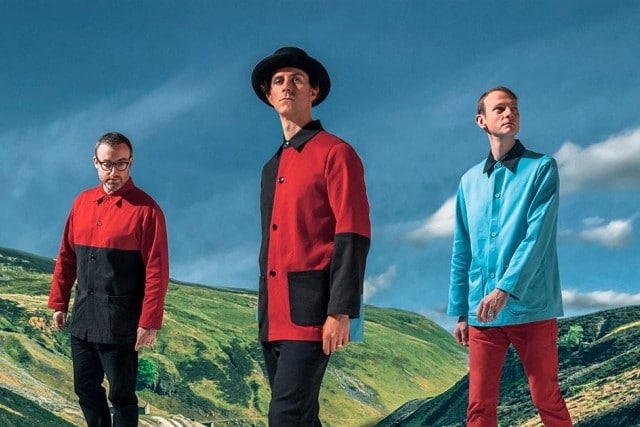 Maxïmo Park caused minor waves back in 2005 for being the first guitar band to be signed by the Warp label shortly ahead of the release of their debut album A Certain Trigger. These days they might not get quite the same level of attention, but the Newcastle-formed outfit has developed into a dependable, consistent band with an ability to play powerfully direct post-punk influenced rock. They’ve also maintained a strong fanbase since, something that was in evidence at the first of two nights they played at EartH in Dalston.

The release of their seventh album Nature Always Wins earlier this year proved how they have pursued tweaks and adjustments to their sound rather than any wholesale changes, but it sounded fresh and galvanised, the work very much a band that knows their role and can execute it with precision and power.

That they begin tonight’s show by launching into lead single All Of Me is an indication of their confidence. Other bands may have held this back to provide a mid set boost, but they have enough moments to allow it to get things off to a flying start. It’s a typically intelligently written and melodically despatched overture of guitars. They’re expanded to a five piece for their live shows and, as frontman Paul Smith sings “it’s where I belong”, it’s hard not to see it as a comment on his natural suitability of performing in a live context.

Other tracks from the new album hit home hard in the early stages. Smith delivers Baby, Sleep from on top of the monitors at the front of the stage and with a book in hand for additional dramatic effect. They also career through Placeholder with the Grenfell-inspired anger of Why Must A Building Burn following soon after. Child Of The Flatlands is introduced as a “mildly psychedelic journey” by Smith and it offers a point of difference to the rest of the set, a brief detour away from their spikier, new wave informed tracks. Versions Of You sees them revert to more familiar ground, powering along in bold primary colours.

Later, in the encore, in the muscular and compact Partly Of My Own Making Smith sings of how “I’ve lost some luminosity” and “my metabolism’s not what it used to be”, but his performance suggests otherwise. He remains a supremely energetic and animated frontman, commanding the stage with speed and sharpness of movement.

Elsewhere, they cherry-pick moments from their back catalogue. Postcard Of A Painting from their Mercury Prize-nominated debut is preceded by a reference from Smith to the sadly-no-more Islington venue the Buffalo Bar which the band had driven past earlier in the day. Freewheeling versions of The National Health from their 2012 album of the same name and Questing, Not Coasting from 2009’s Quicken The Heart arrive and second album Our Earthly Pleasures is represented by Our Velocity and the arms-aloft, fan favourite Books From Boxes. They clatter through the headstrong, adrenaline-fuelled Limassol and finish up with the turbocharged cycles of early breakthrough moment Apply Some Pressure. It caps an impactful, driven show where momentum never dropped, a reminder that 16 years since they first emerged, Maxïmo Park are still a musical force to be reckoned with.