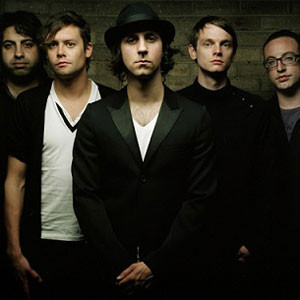 From the outside, Nashville’s Mercy Lounge looks like an abandoned factory straight out of Gotham City. But once inside you are transported into some hedonistic Jack Daniels paradise. Scantily clad Jack Daniels girls (do you see a theme developing here?) tempt you with nibbles whilst the bar offers up a variety of (whisky-based) cocktails.

This was the JD Set, a corporate sponsored mini-festival thingy put together to mark Jack Daniels’ birthday. Yet close your eyes and the surrounding chatter of English voices made the place feel more like a fashionable London venue rather than a bar at the heart of the US’s country music capital.

The set opened with Tennessee natives The Features, who enthusiastically played their way through tracks from their debut album Exhibit A. Whilst perhaps the least well known of the three acts on the bill, their set was met with universal approval. Excellent pop melodies coupled with the easy charm of front man Matt Pelham quickly endeared the band to the audience, successfully creating a warm ambience that was not entirely alcohol related.

In stark contrast were Editors, their majestically dark songs were somewhat out of sync with the evenings celebratory mood. Nevertheless the craft of their songs and the quality of their musicianship was undeniable. On tracks such as Blood, mechanical drumming and brooding baselines provided an irresistible platform for Tom Smith’s vocals and Chris Urbanowicz’s superbly dynamic guitar lines. Editors’ rich layered sound was perhaps too much for me to fully appreciate on this first listening, but it’s clear that the comparisons with Interpol and Joy Division were not unfounded. There will always be room for new music where the style matches the substance so sublimely.

Headlining the set were Newcastle band Maxïmo Park who arrived on stage to warm applause. Every band needs a focal point and, in Paul Smith, Maximo certainly have a lead singer that polarises opinion. Sporting a ‘idiosyncratic’ hair cut and onstage movements so twitchy that he could have been auditioning for Rain Man, he’s a character you either love or hate.

It would be a shame however if people wrote off Maximo Park on this basis; because from the brash confidence of Graffiti to the lovely closing lines to Going Missing there is a lot to like about this band. More accessible than The Futureheads, Maximo Park have enough guitar hooks and personality to win over even the most hardened critic.

Nashville may be the home of country and western music, but for one night at least it turned into a kind of indie heaven. Sleep deprived and drunk, I, like many others, left smiling.