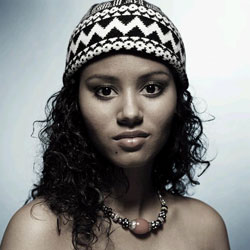 Since she supported Angelique Kidjo at this very venue six months ago, Mayra Andrade has picked up a BBC Radio 3 World Music Award nomination for Best Newcomer. Accordingly, she returns not as support act but as headliner.

Since 2003 Cuban-born Andrade has been living in Paris, but she’s lived in countries as varied as Brazil, Senegal, Angola and Germany.

But it is Cape Verde in which she has spent most time, and accordingly it is these islands off west Africa that most influence her music on debut album Navega.

In translation the 23-year-old’s lyrics, which are almost all in Creole, reflect politics, love and cheeky turns with urbane sounds absorbed from jazz, Africa and Latin America.

Tonight she is joined by drums, bass and guitar which strike up the first song as she enters. Under a full-length golden evening gown her movement is a soft and graceful, a combination of unhurried swaying, bounce and a subtle swivel of hip. She glides around the stage, spending a little time with each musician, before taking the microphone. When she does let out her voice, it flutters around the auditorium, butterfly like, rich, vibrant, delicate and lovely.

So seductive is her voice that it’s easy to forget that tracks like her opening number, Dimorkransa, are fiercely intelligent. They attack poor government and mendacity despite her lilting and gentle presentation.

Like some exotic bird, Andrade is magnetic on stage, and romantic themes are central to Comme S’Il En Pleuvait. She explains that the song is inspired by an old woman she passed every day on her way to school, who told her she used to be a princess. Confidently, Andrade insists that we sing along here, and sing along correctly. She enjoys her moment of direct command and conducts the audience with ease. Taking advantage of the new and keen followers she brings the houselights up for a clapping fiesta for Kem Ki Bem Ki Ta Bai.

The band, inevitably overshadowed, provide strong support. The drummer in particular is marvellous. Dispidida is a funky melody where Ze Luis Nascimento plays everything from Djembe to triangle. He taps and pings and runs a stream of beats with each finger seemingly working on a different instrument. Tumultuous applause follows.

If it werent enough that she has a gorgeous voice, is a talented linguist and passionate lyricist, Andade also plays her own instruments. During Tanuka she takes up a metal bar and strikes and strokes it rhythmically. Elsewhere she plays some fine guitar. She also includes an earnest trumpet impersonation, scatting and humming just how much fun she is having, especially through Navega, which brings the set to a close.

Throughout the hour’s set, that feels shorter, she proves that, despite most people not understanding a word of the Cape Verdian Creole, there is no mystery why and how she has garnered so much international praise and the love of so many. Still so young, Andrade is only going to get better.