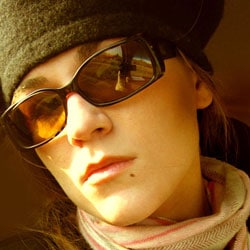 Melody Gardot’s return to the London Jazz Festival didn’t get off to thebest of starts. The crowd were distinctly not amused by being made towait nearly 40 minutes after the 24-year-old chanteuse was due tostart, at which point she finally deigned to put in an appearance.

Matters weren’t helped by the management playing what seemed to be onesong on a short loop during the interval and subsequent wait. So the audience weren’t in an especially forgiving mood,with several rounds of jeery clapping ahead of her eventual entrance.

And they gave her a frosty reception as she walked through theauditorium and down towards the stage – prompting her to shout “Thisain’t no church, but it ain’t no funeral either!”

It wasn’t clear how the evening was going to pan out from here, withGardot’s first movements on stage revolving around a curious display offalling to her knees, pouring sand and then looking at itcontemplatively – presumably making some reference to the passing oftime and the general futility of existence.

This was quickly followed by some distinctly abstract soundsemanating from the instruments on stage – all very much at oddswith the general laid-back vibe of her albums. For her part, Gardot hoiked herselfover the front of a grand piano and proceeded to twang the stringsinside, rather than the more usual method of sitting down and ticklingthe ivories. What the people who have to the maintain the Steinways ofthe Southbank Centre made of her antics isn’t known.

Eventually this tomfoolery gave way to something slightly more conventional, inthe form of The Rain, from her most recent album My One And Only Thrill.It felt impressively intimate, given the size of the venue, and the crowdthrew its weight behind her after Your Heart Is As Black As Night.

After introducing her saxophonist Irwin Hall – who she only met amonth ago, at the Tokyo Jazz Festival – she left the stage,noting that we’d be venturing to Paris through the soundscapes he wasabout to create. She left us with the memorable thought: “Pleaseconsider any turbulence to be a butt massage”. Hall’s musical abilities hadnot been understated – he’d been a strong performer all evening, and atone point during his solo was playing two saxophones at once; no mean feat.

Returning, Gardot seemed to have settled down and looked likeshe was enjoying herself a little more. She thanked the audiencefor their patience, and noted that it had been “a long day and a longtour”, as well as being the second anniversary of her first coming toLondon.

She served up some wonderful Brazilian rhythms during If TheStars Were Mine, which built upon the album version, and also includedtouches of exotica in the vein of Les Baxter. Moving across thecontinent, we also had a dash of tango during Love Me Like A RiverDoes.

Gardot recalled a story about being stranded in Portugal for a whilewhen she lost her passport, and encountering the word “saudade”, which isparticularly difficult to translate, but roughly means longing forsomething or someone that you love and which is lost. It was a prefaceto performing Deep Within The Corners of My Mind, and gave it a rather poignant dimension.

Things headed in a bluesy direction with Who Will Comfort Me, albeit withhalf-hearted singing along by the crowd, when directed. An a capellaversion which followed shortly afterward seemed to be the encore, andpeople duly applauded and made for the exits.

But after a short while the band came back on and played a killer version of the jazzstandard Caravan, a piece first performed by Duke Ellington back in1937. It was rather unexpected, and ended the evening on a high. Gettingthe crowd back on her side was a big ask, but she managed it.