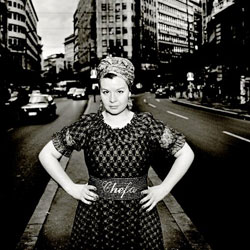 Little sleep and a day of sunshine and showers do little to deter the spirits of the punters at day 2 of Melt.

It’s an unfortunate false-start though when we discover, much like at Why? the day before, Erland Oye‘s new project Kakkmaddafakka proves a popular draw in the Klub stage and thus is impossible to get anywhere near it. So we trot over to Cobblestone Jazz, featuring Minimal god Matthew Johnson who does his own set earlier in the evening. The performance is revelatory, and consists of layer upon layer of smooth techno leaving the audience barely pausing for breath. A brilliant start to the evening.

And then it starts raining again. Hard. So we venture for shelter, and sacrifice a potentially brilliant Notwist set because we’re pussies. We do however catch Operator Please – Australian’s best export since Kath & Kim? As if. Poor sound and mediocre Gossip-lite tedium does little to conjure any enthusiasm so it’s down to Miss Platnum to raise our spirits.

A massive hit in Germany but virtually unknown anywhere else, she mixes Princess Superstar-like naughtiness with samba beats and a full brass band. Easily the most unique act witnessed this weekend but still not one that lingers in our memories for very long. Her covers of Pharoahe Monch and Justin Timberlake were entertaining enough, though.

The tail end of Irish electro favourites Jape‘s set makes us wish we saw more of it, while whoever told Hoxtonite Kissy Sell Out that having a full band would be a good idea needs shunning. A truly dreadful 15 minutes wasted there. Bonde Do Role don’t fare much better, the shambolic nature of their live performance doesn’t add any unpredictability, more an incoherent shower.

It’s big guns Franz Ferdinand that draw the biggest crowd of the day. A mix of material from their two albums released thus far and a shower of new tracks, it delivers a set that’s greeted with some much needed fervour from a soggy crowd. The new material sounds strong, when we’ll get to hear it is another matter entirely.

Len Faki turns things up even more over at the Big Wheel, his euphoric techno managing to get even the stiffest of people on their feet. But back at the main stage Róisín Murphy is greeted with quite the opposite. Despite delivering one of the weekend’s strongest performances, including multiple costume changes and a stunning vocal delivery, the crowd are worryingly apathetic. A shame because this was probably the day’s best set.

A quick swing of the head round the Klub stage sees ex-Le Tigre members JD and Jo DJ under their new guise Men but the legs start to give way and we decide to wrap up for another night.