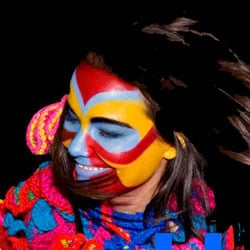 Today marks the first ever Sunday at Melt.

In the past the festival had only ever been a two-day affair, but this year two stages remain open. The Gemini stage plays host to a crop of electro goodness, but it’s the main stage that’s the main focus. Opening it are Los Campesinos! whose cheery indie pop manages to being out soaring sunshine and thus a mass of people huddle to the front. The band look pretty tired (it’s later revealed they slightly overdid it the night before at a Spanish festival) but the music doesn’t fall short because of this and a rousing You! Me! Dancing! Is greeted with many smiles on faces.

Shortly after is Neon Neon, who fare equally well in the heat and rightly decide to play the stronger tracks from debut album Stainless Style, I Lust U being a particular highlight. A later, more intimate slot may have really seen them up their game but this mattered little to those dancing away in the German sunshine.

The same cant be said of Get Well Soon, whose dull, Elbow-lite plodding only makes us go for a wander and fetch another one of those beer jugs. A ghastly cover of Underworld‘s Born Slippy is a notable low. Just, awful.

Thank goodness for Battles, one of the more eagerly awaited bands of the weekend and despite having been playing the same set of songs for near two years now, don’t lose any of their intensity and excitement onstage. John Stainer continues to be a complete demon on drums and the craftsmanship between the four of them makes us wish album number two was just a little bit sooner. Race will definitely go down as one of the weekend’s defining moments.

Festival whores Hot Chip are a perfect band for the last night of a festival. A mostly hit-filled set and highlights from recent third album Made In The Dark, the band looking happy and relaxed. Hearing Ready For The Floor whilst gazing upon a beautiful sunset would probably have been the perfect end to any weekend.

That is, if Björk had not showed up. After a lengthy wait, the now familiar set up with full female backing is complete and the Icelandic queen marches onstage to play tracks spanning her entire career. Among the highlights were a beautiful Pagan Poetry, leaving the hairs pretty much standing up everywhere, a surprise rendition of Triumph Of A Heart, the highlight of the ill-received 2004 record Medullah and an infectious Joga. If there must be one criticism, some of the Volta material is already beginning to sound stale and not shaping up to be as timeless as the classics played tonight. Some of the audience’s response left a lot to be desired too. Nonetheless, few artists could cap a weekend off quite as brilliantly as this lady did.

And that’s it. Those with more stamina were offered the chance to keep dancing all night in the remaining dance tent, but for the weary among us it was an “early night” at just gone 1am.

Melt is a great event and is blessed with a wonderful picturesque setting but, despite the line-up on paper looking striking, there were very few “Wow!” performances. Whether that was down to the bands being involved having festival fatigue is unsure. But none the less the music on offer was far broader than anything on offer in the UK and one hope Melt! continues successfully in an ever-growing festival climate.