by Steven Johnson
published: 21 May 2011 in Live Music Reviews
Tweet 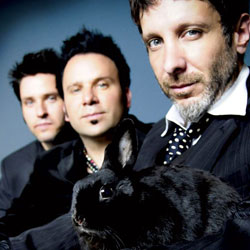 When Mercury Rev released their landmark album Deserter’s Songs in 1998 it represented something of a rebirth for the band, redefining them as astral dream-psychedelicists, a development alluded to but never quite fully realised on its predecessor See You On The Other Side.

It was possible to view it as being instrumental in paving the way for some of the key guitar albums that were to follow over subsequent years. This is most evident in The Soft Bulletin by The Flaming Lips and The Sophtware Slump by Grandaddy, but also to a smaller extent in important albums by bands such as Midlake, Arcade Fire and Grizzly Bear.

The trend to play albums in their entirety has snowballed in recent years and there had been a perception amongst many that Deserter’s Songs was long overdue a live outing. Shows like this would see if the band could translate the opulent sound of the album into a live environment.

The panoramic, starlit beauty of Holes opens the show, sounding just as sublime as on record. The near-balletic elegance of both Tonite It Shows and Endlessly follow, each track featuring additional, harder-hitting drumming that serves to expand the sound. These were the first of a number of subtle embellishments that ensured the evening would not simply involve a basic facsimile of the album.

Similarly, the majestic Opus 40 tonight ends with an epic, extended guitar finale and the outré psychedelia of The Happy End (The Drunk Room) is slightly reworked as a guitar-heavy rock out. The other instrumental tracks on the album are more faithfully reproduced, both I Collect Coins and Pick Up If You’re There succeeding as opaque, adumbral interludes. The latter sees Jonathan Donahue play a musical saw, replicating the theremin featured on the album. One other change from the album is guitarist Grasshopper’s delegation of vocals to Donahue for the live version of Hudson Line.

It is Goddess On A Hiway that draws the biggest reaction from the crowd, although arguably The Funny Bird that follows constitutes the highpoint of the night, a rush of adrenaline full of stratospheric guitars and sweeping, escalating intensity. It is a breathtaking moment and confirms the band as sonic alchemists of the highest order. The glorious, kaleidoscopic Delta Sun Bottleneck Stomp is swathed in guitars and closes the main set, although it takes its time to achieve full speed.

Donahue pauses at one point to say a few words on the album, comparing it to some of the albums that he “clung to like a life raft” when he was younger. He appears genuinely appreciative for the love that has been bestowed on the album. He slightly ominously remarks that we may not see the band for some time, although is quick to deny they are breaking up. Donahue’s vocals have become progressively more frail over the years but he remains a theatrical and enigmatic presence throughout the show, an expression of wonder seemingly permanently etched on his face. He conducts the band and lights throughout, enraptured by the spectacle taking place around him.

As often is the case with full album shows, seeing what the band encore with can provide some of the most interesting moments. Their decision to cover Solsbury Hill by Peter Gabriel is on the surface an unusual move, although ultimately it is successfully subsumed into their sound. Old favourite Car Wash Hair is enthusiastically received by the audience, as is The Dark Is Rising, with its condensed suite of dramatic dénouements. A pulsating Senses On Fire closes the (relatively short) show.

Although tonight was a joyful and celebratory show, afterwards it almost felt like a closing of a chapter, a bittersweet moment that we won’t witness again, the band in the process of almost drawing a line under the album. This performance confirmed Deserter’s Songs as their undoubted masterpiece, an awe-inspiring piece of work they will probably never come close to emulating. Tonight illustrated its timelessness and demonstrated exactly why it is so warmly and so regularly venerated.