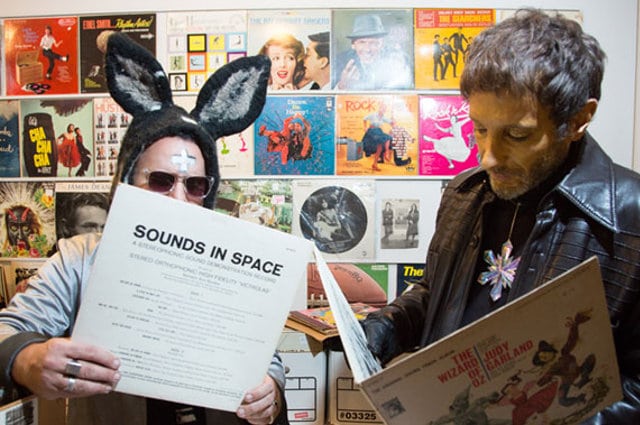 Scheduled as part of Bella Union’s 20th anniversary celebrations, this collaboration between the long enduring Mercury Rev and the Royal Northern Sinfonia provided, according to label manager and musician Simon Raymonde, “an opportunity to do something special outside a standard Mercury Rev band show”. Whilst this is undoubtedly true, it also feels as if this is a move so obvious for a band with lush, theatrical, occasionally Disneyfied or melodramatic songs that it is hard to believe that it has not been done already.

The Mercury Rev that appears tonight is not a band of stalwart survivors playing the nostalgia card (in spite of frontman Jonathan Donahue’s insistence that they essentially make “children’s albums”), but rather a group revelling in the possibilities of presenting their work in different ways. Drummer Jason Miranda eschews a traditional drum kit in favour of a standing percussion set-up with suspended cymbals and drums that integrate well with the Sinfonia’s more traditional percussion section (timpani and tuned percussion). Grasshopper and Raymonde (guesting on guitar) keep distortion to a minimum, instead focusing on lattice-like guitar lines and creating atmosphere.

The evocative and sensual Central Park East (from 2015’s excellent The Light In You album) opens the show with a rapture that never quite dissipates across the whole 90 minutes. Donahue further amplifies his slightly camp performance tendencies, all wide eyes and extravagant hand gestures, delivering a vocal performance that is muti-faceted (occasionally conversational and reminiscent of Destroyer’s Dan Bejar, at other times wild and flighty) if sadly sometimes buried beneath the resonances and drama of the larger ensemble. Donahue is in remarkably good humour all evening, self effacingly describing his lack of formal musical training and failing to resist the urge to join the excellent, impressively unfazed Hugh Brunt in conducting the Sinfonia.

In the early stages of the show, the band prove adept at using the smoother, lusher textures of the Sinfonia and for a while it appears as if the show might end up being a little one-dimensional beneath surface impressions. Fortunately, they find some intriguing alternative approaches as the show progresses. There is a compelling, mesmerising new arrangement of Racing The Tide from 1995’s daring and progressive See You On The Other Side and a brilliant celebration of kitchen sink pop grandeur in a rendition of Simon Raymonde’s father Ivor’s I Wish I Never Loved You (a small hit for both Dusty Springfield and Helen Shapiro). Perhaps surprisingly, 2001’s All Is Dream provides arguably the key performance of the show, with an elaborate and haunting reimagining of Hercules and a fairytale take on Spiders and Flies.

There are predictable favourites from Deserter’s Songs, with Endlessly and Tonite It Shows sounding even more as if they could be part of a Hollywood musical. The nature of tonight’s ensemble does however mean there’s no room for the songs that emphasise groove or rock dynamics a little more (no Goddess On A Hiway or The Funny Bird from Deserter’s Songs and longstanding mainstays such as Chasing A Bee or Car Wash Hair are also omitted). The rendition of Opus 40 just about works, with bassist Bastien Juel providing the anchor of a pulse, but it is conceivable that the set as a whole might have been enhanced by exploring some of the more percussive or abrasive textural possibilities of the Sinfonia instruments.

This is, however, compensated for by the presence of some intriguing choices of deep cuts. Downs Are Feminine Balloons, from 1993’s cruelly unloved Boces is particularly lovely, with a very present and captivating trumpet solo from Richard Martin. They also include There You Are, a song Donahue wrote when he was briefly a member of The Flaming Lips. Performed without the orchestra, this might be the evening’s weirdest, eeriest and most unconventional moment.

The home straight features an entirely sincere rendition of When You Wish Upon A Star (another piece of common ground with The Flaming Lips, who still regularly perform Over The Rainbow in their sets), before finishing with Dark Is Rising, perhaps a more complex song than it first appears, alternating grand flourish with melancholy and loss. The band then leave the stage while the Sinfonia reprises A Drop In Time, providing a sense of poignant closure.