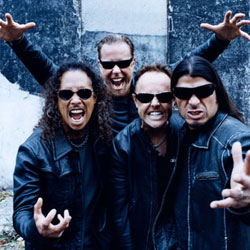 As album launch parties go, a club and free booze tends to be the norm. This 800 million building, formerly known as The Dome, is lined with chain bars, restaurants, shops, a cinema, two gig venues, a club and plenty of unused floor space. It isn’t the likeiest of venues for such an event.

But here we are watching thousands of metallers pacing about. Even a cafe bar is cheerily blaring out Master Of Puppets.
On a day when 5,000 people lost their jobs in the Square Mile, watching others wash down sushi and beer with disposable income suggests that, however tough the times are that we’re facing, certain things won’t change too much. The Doomsayers had christened today Meltdown Monday. Here, it was rather Metallica Monday.

Tonight continued the scattergun promo campaign for their ninth, and rather superb Death Magnetic. The release, depending on which continent you live in, has been backed by two major labels, two video game tie-ins, various box sets, signing sessions, TV recordings and three arena fan club gigs, with this evening following New York and Berlin. Tickets were sold for 5 and all proceeds donated to charity.

The stage echoed the snake pit tours of the early ’90s, in the centre of the arena boxed in by the crowd. There were microphones on each corner for James Hetfield to take lead wherever he felt like roaming. Lars Ulrich’s drum kit rotated 90 degrees every so often, Kirk Hammett and Rob Trujilo zigzagged the expanse endlessly, offering the rare treat of watching Metallica in their element from a variety of angles.

An intro tape medley of The Call Of Ktulu and Battery ushered in a fairly ropey opening with the first two songs from Death Magnetic, That Was Just Your Life and The End Of The Line, with James Hetfield’s mic seemingly stuck in sound check.

Hetfield seemed concerned too: “This place is huge. Can you see us? Can you hear us?” Pity the souls at the back of tier three. Thankfully it tightened up for the bone crunching Of Wolf And Man, a monumental delivery of One and the riff heavy Broken, Beat & Scarred.

“This is from the very loved St Anger album,” deadpanned Hetfield as he introduced Frantic. “Say what you will, this song kick ass!” Even Until It Sleeps made its way into the set which ticked off every studio album bar Reload.

The mid portion then shifted focus to Kirk Hammett as he took lead for Wherever I May Roam, an immortal For Whom The Bell Tolls and new anthem in waiting, The Day That Never Comes. For the encore the house lights were left on for an old school workout: Queen‘s Stone Cold Crazy, the “borderline disco” stomp of Jump In The Fire and the mother of all head bangers, Seek & Destroy.

The final scene was one peppered with a smiles, chest beating, fist pumping, devil’s horns and bouncing black Metallica balloons. As parties go, Metallica sure know how to put one on.