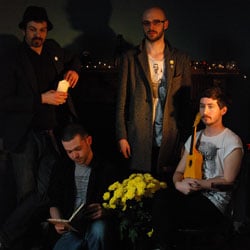 Judging by the direction and timing of the whoops coming from different pockets of the room, there are two camps of Meursault fans; those who prefer their vocally intense, Frightened Rabbit-esque side and those who freak out to the dramatic, electro half of their back catalogue.

Lucky then that the band don’t seem to have picked their preferred sound either, and tonight we’re treated to their full range. Surprisingly they jump the gun and play Crank Resolutions – the stand out track from their latest album All Creatures Will Make Merry – as their second song. A killer on the record, it realises its true potential live, giving singer Neil Pennycook free reign to yelp and hammer out driving blips that career around crashing, urgent beats. It’s a sound that Bloc Party have spent years trying to achieve; right from its opening gambit – “I broke down on New Year’s Day, and I mixed my drinks and I lost my way…” – to the closing, reflective wails, it’s as ferocious as it is eerie.

Its album companion piece, What You Don’t Have (“the most uplifting song I’ve ever written,” quips Pennycook) soon follows. A lo-fi wall of noise and distortion, it clouds his far-away, very Scottish vocals. He sounds on the verge of tears and, despite all eyes in the rammed Luminaire being fixed on him, lost and lonely.

Their ode to the 19th Century Scottish MP and book collector William Henry Miller, and Martin Kippenberger, a similar song about the artist behind much of the Manic Street Preachers‘ cover artwork, prove their scope to be wider than most. But those who lap up the more traditional, crackly sounding Meursault are more than satisfied by One Day This Will All Be Fields. The rest of the band stand aside, gathered around a mic, leaving Pennycook alone in the centre of the stage with just his banjo for company. They needn’t have bothered attempting the harmonies though, as the audience does a far better job, singing along and stamping their feet to the sparse but emotion-fuelled campfire song. A real goosebump moment.

Some of their older tracks get a look in too; Pissing On Bonfires/Kissing With Tongues from the album of the same name is an upbeat, more straight forward, rolling, folk-tinged song, that recalls Counting Crows‘ finer moments (yes, there were some). But the night belongs to All Creatures Will Make Merry; an album which, back when it was released in May, we called a “confused, muddled collection” that shouldn’t be listened to track by track, but as a complete album. Tonight they ripped that theory to pieces.