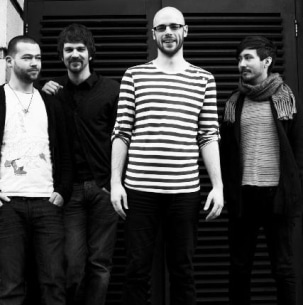 Picking a setlist is a tricky task; if you’ve got a new album on the horizon you want to try it out but at the back of your mind you know that everyone’s there to hear their favourite songs. Getting the balance right is an art in itself, but when you’ve only got two LPs under your belt, it takes a certain level of self-belief or just plain stubbornness to come up with a setlist like Meursault’s tonight.

Their third album, Something For The Weakened, is due in July, but they’ve been peddling it live for more than six months now, almost ignoring the existence of their brilliant second LP, All Creatures Will Make Merry, and tonight it dominates again.

They’ve been dubbed the ‘Scottish Arcade Fire‘, thanks to their epic, electro-folk belters, which are helped along by Neil Pennycook’s spine-tingling vocals. His faraway voice steered All Creatures Will Make Merry and its predecessor, Pissing On Bonfires/Kissing With Tongues, and while his voice is still the driving force behind Meursault, the newly shaped band seem adamant on giving the music a higher profile.

Where once a lonely snapping banjo, pummelling keyboard and an occasional humming fuzz of reverb was an adequate platform for Pennycook, the new songs are clunkier, with heavier layers of instruments thrashing around him. It’s one of those decisions that leave you scratching your head; Pennycook’s voice is their trump card. They could raid Stock, Aitkin and Waterman’s demo pile and still send shivers down the backs of the stoniest of cynics. Anything that distracts from his voice should be shot down, not turned up.

Pennycook has mastered the unlikely combination of sounding on the verge of tears, vengeful, hopeful and sad all at the same time. Dramatic and overblown, his voice shifts from quiet and crackly to forceful and shouty. Normally it can silence a room, but tonight, despite the venue’s (tiny) size, there’s a hum of chatter throughout.

While they might not command the same attention, the songs showcased tonight work better as standalone tracks than the carefully compiled albums of their back catalogue. The intense dark humour, curve-balled by an ever present vein of optimism, remains but tonight’s preview of Something For The Weakened hints at a more accessible and radio friendly Meursault.

Whereas they were once a band to invest in and spend time pouring over, this new collection of songs is more immediate than those that have come before but lacks the heart-wrenching intimacy of the likes of Payday and Crank Resolutions – a point highlighted by the song they close with. One Day This Will All Be Fields is a lo-fi, foot-stomping campfire sing-along that echoes through the room; a haunting reminder of just how good they can be.