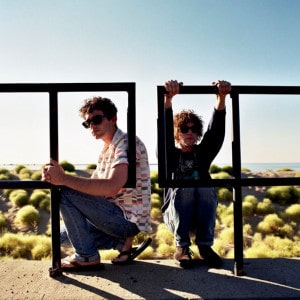 Back in 2008, MGMT were in pole position. Their debut, Oracular Spectacular, had sold over a million, they were nominated for a BRIT award, and sundry accolades were falling into their hands.

Their second album, Congratulations, lacked the vital accessibility of their first record. It was slower of pace, and failed to provide as many festival-ready tunes. Their latest album takes a more psychedelic turn than their previous work and, on their current tour, MGMT have been performing these new songs in front of UK audiences for the first time. A lot was riding on tonight’s show – it was the duo’s first London gig for three years.

Although Andrew VanWyngarden and Benjamin Goldwasser show up bandana-less, their youthful hippy sensibilities have not disintegrated – they still come on in  Hawaiian shirts, kicking off with a cover of Jane Fade’s Introspection.

Next up is Time To Pretend. This is when MGMT are at their best: when their vocals effortlessly immerse themselves into colourful electronic soundscapes. It is easy to get lost in the movements of their silhouettes against the patterned projectors behind them.

However, the performance of some of their slower, acoustic tracks didn’t work in their favour – it seemed to mellow out members of the audience a little too much. An exception to this was their 12-minute masterpiece, Siberian Breaks. The song shares many characteristics with the work of Pink Floyd, with its washed out, psychedelic chords and dreamy backing vocals.

Shortly after, they played the epic Of Moons, Birds And Monsters. It sounded fantastic and heavy hitting, but it should have been saved for later on in the concert. Instead they were left with tracks like Flash Delirium, the forgettable single from their second record.

“For this next number, we’d like to start with numbers”, VanWyngarden said before counting into Kids, complete with 64 bar synth solo, which was distorted to make it sound like an accordion.

Towards the end of the set, they played their recent single, Alien Days. A remote controlled spaceship emerged, flying over the band while they were performing. As props go, this one was great – so great, in fact, that it ultimately overshadowed the music.

For a band known for their capricious live shows, their performance tonight seemed a little pale. Kalaedescopoic backgrounds on gargantuan projectors couldn’t make up for their lack of stage presence. There were glimmers of magic, but they didn’t time that magic well, and the set in total as a result was little short of disappointing.