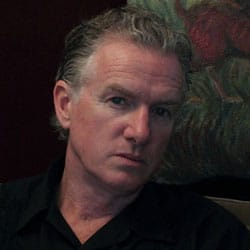 An underground venue in achingly hip Hoxton isn’t the kind of place you’d normally expect to find a 52-year-old grizzled rock veteran like Mick Harvey, a fact he wryly acknowledged by welcoming the audience to “however you pronounce it” before treating them to a tight set of his trademark Australian country-blues.

It’s certainly been an interesting couple of years for the Rochester, Victoria native. First, he took the decision to finally part company with his long time collaborator Nick Cave after more than three decades as an integral member of The Birthday Party and The Bad Seeds. He remains part of PJ Harvey‘s band and toured with her in support of her recent album Let England Shake. Then last month saw the release of his own well received Sketches From The Book Of The Dead album, a collection of self-penned compositions that saw Harvey seeking to establish himself as a singer-songwriter of note away from Cave’s imposing shadow.

Looking trim and relaxed in a casual black sweater, the multi-instrumentalist favoured a stripped-down sound for much of this rare solo show, with just double bass player Rosie Westbrook accompanying his own raggedly atmospheric guitar. As a result, some of the more widescreen, cinematic textures he achieved through a broader musical palette on Sketches… were somewhat lost and the songs themselves left open to greater scrutiny in a new, rawer state. Not all passed muster.

While Harvey is undoubtedly a good storyteller and performer, his writing is a little one-paced – slow, maudlin and short on truly memorable tunes. At his best – for example on the expressive, evocative The Ballad Of Jade Givens, the tragic tale of his father’s best friend’s suicide – he succeeds in drawing the listener into his bleakly introspective world. But in a cavernous venue devoid of intimacy, other songs blended rather forgettably into one another, lacking the spark to command the space and exposing the absence of variety in Harvey’s output, although his gruff croon of a voice was in fine fettle throughout.

Some much needed dynamism was added when drummer Rob Ellis joined Harvey and Westbrook on stage for a handful of later numbers, including a muscular Famous Last Words from Sketches… and an epic version of Planetarium, a tremendous song by the late Bruno Adams of largely unknown Bad Seeds contemporaries Once Upon A Time.

A spell rocking out seemed to reenergise a hitherto slightly lacklustre performance, and Harvey closed the evening with two storming encores, covers of Tim Buckley’s The River and his own former band Crime And The City Solution’s Home Is Far From Here, the latter in particular greeted with delight by older fans.

These final flourishes encapsulated Harvey’s dilemma – he’s clearly determined to develop his own voice as a songwriter, but he’s at his best when interpreting the work of others.

A brief mention too of Harvey’s support act, Essex’s Gemma Ray, who has already released three albums on the Bronzerat label: An artist of real potential with a confident stage presence, her intriguing brand of psychedelic, organ-heavy blues is definitely worthy of wider recognition.