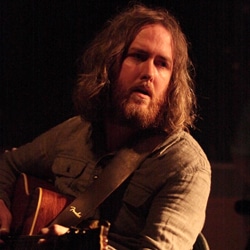 Despite the considerable esteem in which Midlake are currently held, just listening to the idle chat of the crowd pre-gig indicates that a considerable quantity of tonight’s audience is here due to the pulling power of the support acts.

Jason Lytle’s Grandaddy are still much missed by anyone that had the good fortune to have caught them on their tours of yesteryear, and his all too brief appearance tonight reminds us of their understated majesty. Taking to the stage looking like a truck driver who’s lost his way, Lytle runs through some choice cuts from Grandaddy’s career. His baseball cap is pulled down tight so that his face is obscured by shadow constantly, as if he’s almost stripping his presence from these songs and merely giving them a voice. Jed’s Other Poem is still heartbreakingly beautiful, but despite the somewhat dark tone of his songs, Lytle is in fine spirits tonight. He jokingly berates his drum machine for upstaging him, before launching into a fine reworking of A Miner At The Dial A View, which establishes that most people here want their Grandaddy back.

John Grant has been one of this year’s big surprises. Following the dissolution of his band The Czars nobody expected anything to emerge from the ruins, yet he has returned with Queen Of Denmark, an album of incredible quality. It’s fitting that he’s on this tour, as Midlake provided their services as his backing band for much of the album. Tonight however is a stripped back affair, not that it makes a single bit of difference.

Grant’s presence is mighty, his voice is transfixing tonight, coloured with warm tones. Never once going through the motions, he fills each of these songs with an intensity that at this time in the evening is daunting.

Opening with new song You Don’t Have To, it’s clear that Grant’s got plenty of quality material in reserve for his next album. The sci-fi pop tones of Sigourney Weaver and Marz drift by in a cloud of sublime harmonies which masks the confessional tones that sit deep in their hearts. He closes with Queen Of Denmark, a song alternating between utter apathy (“I wanted to change the world, but I could not even change my underwear”) and fiery anger. It also features some incredible vocal work from Grant that draws howls of approval from the audience as he nails one particularly emotive section. His set is cut to a cruelly short half and hour, but in that time, Grant has done enough to suggest he might be the star of the show tonight.

Midlake hit the stage looking like they’ve been on a four month tour in the back of a haytruck with absolutely no change of clothes or stops for sanitary breaks. Cheese cloth shirts, enormous beards and lank hair is the order of the day. Dishevelled they might be, but as their songs start to take shape in the dimly lit venue, there’s no doubt that they’re phenomenally accomplished. As they work their way through their back catalogue it feels as if the gig is taking place in a time before punk.

Twin flute solos flutter from the speakers, Freebird is called for on a frequent basis, and then there are the jams. The Core Of Nature for example is basically folk passed through a Neil Young curmudgeon filter, refusing to end – ever. Endless solos later, there are plenty of beards being stroked in the audience as the musicianship displayed by the band is appreciated, but the point of the songs is long gone.

However throughout tonight’s lengthy set, pulling heavily on the this year’s stunning album The Courage of Others, the band are on fire, seemingly intuitively jamming on riffs as the songs disappear up new avenues. Guitars and flutes duel for superiority, while the drums pound with stadium rock sincerity. In fact the only real harmony to be found is more often than not in the exquisitely delivered vocals. It’s fair to say that Midlake are on form, but that their extensive set has a propensity to drag.

It’s a definite relief when they bring John Grant and Jason Lytle back on stage to run through some old songs. Lytle steals the show with Midlake rattling though AM 180, which is simply phenomenal. After over an hour of impressive musicianship it’s perhaps fitting that a direct upbeat pop song wins the hearts and minds of the audience.