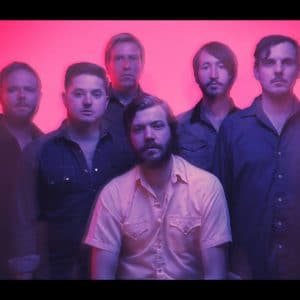 The way in which Midlake announced the departure of singer Tim Smith last year seemed to reflect their personality as a band, the news being conveyed and handled with a quiet diffidence and dignified calm. These qualities were also very much in evidence during their sold-out show at Shepherd’s Bush Empire. They may have parted company with their singer and undergone a re-shuffling of roles but they still appear and sound settled and steadied.

Yet, 2013’s Antiphon album did represent a new chapter, re-establishing the band while retaining a sense of humbleness. It makes up the majority of tonight’s set, but they also acknowledge the music recorded by the original incarnation of the band. They begin with Ages, which showcases the spaciousness and wider vocal harmonies present on Antiphon. The title track follows and proves they are still more than capable of greatness, Eric Pulido’s vocals soaring through the vintage-period Mercury Rev-style guitars to powerful effect.

The first deviation from Antiphon comes with Rulers, Ruling All Things from third album The Courage Of Others. It may have been a more sobering, hardened and wintery album on the whole, but tonight they cherry-pick arguably the two most successful tracks from it for their live set (Children Of The Grounds follows later).

They also tacitly acknowledge the importance of breakthrough album The Trials Of Van Occupanther. When Pulido announces that they are going to invite a friend on stage to play with them it prompts some hasty speculation from certain members of the crowd that it may be John Grant (Midlake backed him on Queen Of Denmark) but it rather more improbably turns out to be the diminutive figure of ex-Supergrass man Gaz Coombes, who lends his vocals to the enlivened propulsion of Young Bride.

We Gathered In Spring shows that these songs have a rougher quality when performed live, and also demonstrates the subtle changes that Pulido’s vocals now afford these older songs. The literate might of Roscoe and melodic guitar signatures of Head Home offer further proof that The Trials Of Van Occupanther is the masterpiece they may never truly equal. Tonight we hear solid, competent versions of these songs but they also do seem to reinforce the point that it is on record that Midlake primarily forge their relationships and make their emotional connections.

They revert to Antiphon for much of the latter part of the set, the pastoral, flute-embellished interlude of Vale being followed by the falling harmonies of It’s Going Down. The Old And The Young strikes a similar note, all lightness and clarity, while Aurora Gone is the closest they get on Antiphon to matching the hibernating, insular beauty of tracks like Van Occupanther and Branches (both sadly omitted tonight). The suspicion remains that live shows may not be their natural strength, but tonight Midlake ably demonstrate why they have become so quietly popular and admired.