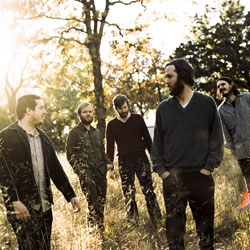 It’s testament to the decaying beauty of Wilton’s Music Hall that the crowd barely notice when the seven members of Texan folk rockers Midlake amble onstage.

Built in 1858, its rustic charm – wooden floors, cast-iron pillars, church-like pews – mixed with the mild concern that it’s all about to collapse around you at any given moment, helps create a decidedly unique experience.

It’s an appropriate setting for a band who seem out of step with modern life and who appear to be mining music’s history in reverse, going from the ’70s influence of their last album, The Trials Of Van Occupanther, to the ’60s folk sound of their latest, The Courage Of Others. They’ve also dressed for the occasion, each member sporting various shades of brown or green so as not to draw too much attention away from the surroundings.

For everything they lack in stage presence, they more than make up for with their slow-burn ability to hypnotise the small but reverential crowd. Opening with the medieval-esque Winter Dies and playing in front of a giant print of their new album’s cover, the venue is suddenly transformed into the main hall of an old castle. You half expect jesters or busty maidens to appear amongst the assembled throng. By the time Small Mountain ushers in the first parp of a flute (there are even flute solos at certain points; call this a rock gig?) the transformation is complete.

The set is made up mainly of tracks from The Courage Of Others, which sound slightly more robust live than they do on record. The Horn gives guitarist Eric Pulido a chance to work up a sweat, especially on the Led Zeppelin-esque intro. Elsewhere, Rulers Ruing All Things and Acts Of Man are delicate and woozy, with front man Tim Smith sounding particularly desolate on the latter, mournfully sighing, “When the acts of man cause the ground to break open / Oh let me inside, let me inside”. The simple urgency of Bring Down is supported by a guest appearance by Bella Union labelmate Stephanie Dosen, whose sweet falsetto marries with Smith’s worn croon to perfect effect.

Though their new sound fits them like a glove. it’s also one that can come across as too familiar in a live setting. New songs that work on the album appear too samey and the band’s reluctance to really engage with the crowd doesn’t help matters. Luckily, they mix in the highlights from Van Occupanther and suddenly the crowd are awake and engaged, and that ability to hypnotise is revealed again.

The familiar keyboard intro to the fantastic Roscoe gets actual hoots and hollers, as does a brilliant Young Bride, complete with a dizzying extended intro that shows drummer McKenzie Smith to be one of the most versatile around. The driving Head Home finishes the main set; its Fleetwood Mac breeziness a nice counterpoint to the more intricate newer material. An extended run through of Branches is all we get for an encore, the band leaving the line “It’s hard for me but I’m trying” swirling high in the decaying rafters.

Their influences may be obvious, but Midlake do what they do so well that you forgive them for occasionally slipping into pastiche. In a venue like this, their affection for a so-called simpler time seems less like an affectation and more like the perfect way to live.