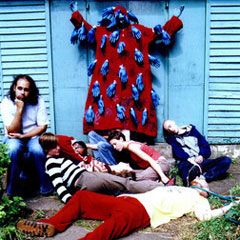 For at least some years Misty’s Big Adventure have given the impression of not caring in the least about the opinions of foldyarmed beardstrokers, the sort of people who would judge whether they deserved to make it big. This shambolic though deceptively talented eight-piece, fronted by a man whose appearance is suggestive of the Honey Monster running a circus in a car repair lock-up, with a dancer in a suit of hands who engages the audience in pissed-at-a-wedding moves, surely only carry on because they love what they do and have found a niche where people love them right back for it.

Throughout a near-two hour set that begins with tracks from new album The Family Amusement Centre and later meanders across their earlier work, Grandmaster Gareth’s big, cuddly, reassuring baritone is the perfect expression for his post-Eric Idle urges for everyone to cheer up and look on the bright side. New track Aggression discusses bad vibes with pleasant rhythms, feeling rather like a carousel ride in the company of a Madness tribute act. And Mickey Mouse reminds of the hugely underrated The Frank And Walters, another band whose songs sported lyrics that often insisted that better things lay ahead.

Unlike on the recorded version, the live rendering of General Confusion does not feature Sir Patrick Moore, the latest English eccentric guest star to join Misty’s Big Adventure (they roped Noddy Holder into a video once). Like much of the rest of the new record it seems already like an old friend, its deceptively well-oiled arrangements finding plenty of space for military drumming and expressive work from trumpet and trombone. Atonement plays on the ‘tone’ syllable to show off Gareth’s voice to great effect, while Just Another Day is possibly the poppiest pop song they’ve yet written; it’s crying out for a rom-com weepy moment to soundtrack.

In such a lengthy set there’s plenty of room for indulgence. On one song Gareth seeks a biscuit but is denied, first by a bandmate singing a denial and then physically, by Erotic Volvo. To have a song about longing for a biscuit in the first place suggests a focus on the small details of life, details Gareth delves into and holds up as inspirational catalysts for studies of the human condition. Much of what Misty’s do can look daft and throwaway first time round, but Gareth’s observational eye is peeled every bit as a psychologist’s might be, taking in the good and the bad and making light of it. There are reminders too of their strength in depth – I Can’t Bring The Time Back is melancholically lovely, and Fashion Parade, despite its decidedly of-their-time lyrics, proves to be a particular favourite still.

To find themselves at this stage of their career playing a small room above the main Garage venue – which tonight, Gareth tells us, is staging a tribute act to a packed-in audience – in their capital city is rather sad; rock-solid songwriting skills should count for more. Yet, in that particularly Misty’s way, it’s also good. As fringe cult stars they can let their set meander, feature requests and allow space for Gareth to ramble on as he sees fit. They’re under no pressure to do anything by the book. The gift this gives them is creative freedom. Quite whether they have the inclination to step up to that challenge remains to be seen, for as this show demonstrates, Misty’s new album slots neatly in to their canon like it was there all along.