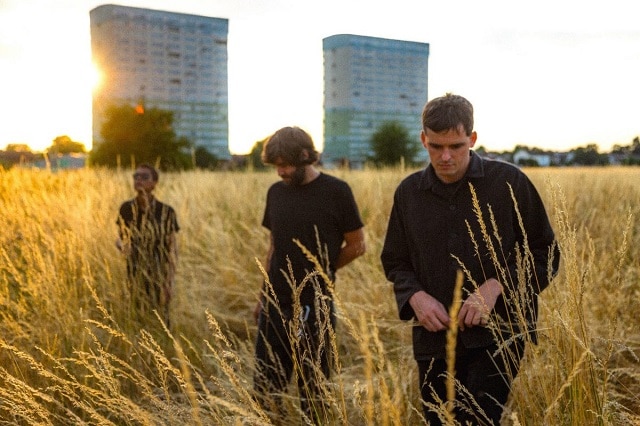 The room, hidden as it is down an alleyway beneath the old Victorian train station arches, cavernous in proportion and flooded with darkness on this sharp March evening, is heaving with supporters and characteristically loud. Filled with expectant chatter and timorous exhalations, none of the assembled appears to notice as the outwardly timid members of Modern Nature shuffle unceremoniously on to the stage and begin to peacefully carve out debut album How To Live‘s opener Bloom beneath the house lights. The music is so hushed that it takes a minute or two before the crowd has hushed their discussions and turned their attention to the stage and begin to gently applaud.

Jack Cooper, formerly of Ultimate Painting, leads the group. He stands left of stage, dressed smartly in dark neutral tones, remaining near static throughout as he strums his guitar, his soft vocals anchoring these songs from floating away, as sprightly as they are. In essence, Modern Nature are a supergroup, comprising members of Beak>, Woods and Sunwatchers amongst others, yet it is Cooper who steers proceedings. In this formerly industrial landscape, he is creator, establishing invocations of pastoral serenity through motorik means.

His mouth glued to his microphone with vocals never rising above more than an anguished murmur, his lyrics paint tales of folk wearily abandoning cities to return to greener pastures. Often obscured beneath the accompanying percussion, the effect is one of sensation rather than content, a desire for something less polluted, be it emotionally or environmentally. In the spare moments when he does address the audience, Cooper seems to have difficulty speaking aloud, as if each glance pointed towards him is accusatory, every clap causing some system of discomfort, when in fact the opposite is true and the audience chooses to hang on his every utterance. After each one of these pained discourses, he has to catch his breath, and recompose himself.

The other members of the band show deference to this shy leadership, courteously waiting for their cues. Cooper may exert semi auteur status within Modern Nature, but it is not him who stands centre stage, rather that space is occupied by guest saxophonist Jeff Tobias. Hiding beneath a baseball cap, seeming enraptured by tiny lights dancing across the concrete roof, he appears unassuming, but when he begins to play his instrument, something almost devilish comes out; a fountain of chaos, seemingly improvised noise that at once manages to feel structured and jubilant. Redolent of the spiritual work of Pharaoh Sanders during the 1970s, his nimble finger work adds a discordant brashness and a sense of contrast and volume to the measured propulsion they rely on.

Tobias isn’t their only secret weapon. After running through the 10 tracks on How To Live, they offer to share a couple of newer untitled numbers and bring back out Aoife Nessa Frances, tonight’s support act and surely an artist now worthy of her own headline performance, considering the acclaim her new record has received. In essence, her role here is as foil to Cooper, allowing him a fleeting chance to retreat from the spotlight. These so far unreleased songs with Frances showcase the group exploring a lax and impish direction, that bodes well for future releases. For if there has to be any criticism, and it seems unjust to posit any on such an idyllic and compelling evening, it is that the quartet have so successfully refined the album tracks, that they sound indistinguishable from the recorded versions. Derek Jarman, writing in the book from which they take their name, proclaimed, “I do not wish to die… yet. I would love to see my garden through several summers”. Let’s cross fingers and plant a seed of optimism that Modern Nature return to us season after season.