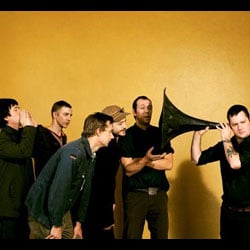 Modest Mouse have crossed over from being US college-rock darlings in the mid-’90s to having a mainstream following with their last two albums, Good News For People Who Love Bad News (2005) and We Were Dead Before The Ship Even Sank (2007 – Number 1 on the Billboard chart, no less).

He may sometimes be compared to the Pixies‘ Frank Black but, though they both possess an edgy eccentricity and unhinged vocal style, they have quite distinct musical personalities.

Modest Mouse are here promoting their recent EP No One’s First, And You’re Next, eight re-recorded out-takes and B sides from the band’s last two albums – an intriguing but uneven assembly of bits’n’pieces. The best two songs bookend the show: the wonderful King Rat, with its unexpected changes in rhythm, features a typically eclectic assortment of instruments in banjo, cello and trumpet, while the haunting mainly instrumental The Whale Song displays eerie whale-like guitar sounds.

The last two albums proper are well represented by songs like the melodiously mellow single Missed The Boat, We’ve Got Everything, with its lively chorus shouted out, the funky guitar playing of Dashboard and the mournfully hillbilly Bukowski. But there are plenty of earlier songs too, including five tracks from garage-style album The Moon And Antarctica. Always liking to surprise, they also perform a cover of David Gray‘s Babylon, which is much more interesting than the bland original.

Now expanded to become a six-strong outfit (though Johnny Marr has been replaced on guitar after he moved on to The Cribs), including two drummers/percussionists, almost everyone plays more than one instrument and the stage is crammed with equipment. Everyone in the band contributes to the rich texture of the music. As he informed the audience, Brock was on painkiller injections but, though his voice sounded a bit husky, the passion was still there and sickness did not impair a fully committed performance.

Modest Mouse may not have not cracked Britain yet in the way that Kings Of Leon, The White Stripes or The Strokes have, but it is surely just a matter of time. Their current EP may seem like a stopgap between albums to keep their name in the public eye, but they are bound to win converts from excellent live performances like this sell-out gig.