by Matt Cotsell
published: 17 May 2011 in Live Music Reviews
Tweet 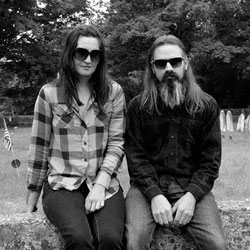 That famous dandy and raconteur Quentin Crisp once said: “It is not the simple statement of facts that ushers in freedom; it is the constant repetition of them that has this liberating effect.” Heady San Fransisco psych rockers Moon Duo seem to have taken that quote and made it their modus operandi. Tonight’s show at Corsica Studios may only have lasted just over an hour but it felt like aeons.

Funny word, aeon. Not only does it mean one thousand million years, it also symbolises “a divine power or nature emanating from the Supreme Being and playing various roles in the operation of the universe”. Guitarist Ripley Johnson and his partner, keyboard player Sanae Yamada, have done just that. They’ve created, over the course of just a few EPs and two LPs, a new celestial racket combining good ol’ fashioned choogling southern rock riffs with ear splitting bass hooks and incessant drum machine beats. They’re forging a heavily distorted pastiche of kosmiche.

Most of their live experience would appear to be built around confusion, paranoia and detachment. Finally taking to the stage (after two support acts and three DJ slots) there is little interaction with the crowd as they plow through the often undistinguishable back catalogue and, taking cues from the Joshua Light Shows of the late ’60s, they stand in front of a hyperkinetic laser projection that scrambles and blinds minds. Beats reverberate through the floors and up legs yet ultimately bypass the brain. This is head music for the already lobotomised.

Playing the title track from the recent Mazes album gave the unsure crowd a heads up as to the way events would unfold. Johnson faces the wall effortlessy riffing and Yamada, heavily obscured by fringe, hammers out rhythms through the speakers and into ears.

Midway through the show, Johnson explains that they’ve chosen to drag out the numbers as long as possible because they’ve enjoyed their European bash and dont wan’t the fun to end. For a disorientated crowd in a boiling hot venue, it’s more of a challenge than an apology. The band are gonna play and we’re gonna either follow or disintegrate. Finishing with album favourite When You Cut, hypnotic and brutal with its repeated chorus of “I feel the walls closing in on me”, the pair come true on their mission statement. We understand, we comprehend the madness. When the song closes and the visual bombardment ceases, a sense of release and relief occurs. It’s shortlived as they come striding back on stage for encores. It’s a little too much to handle; out we head into the much needed rain, leaving them to carry on into the night.