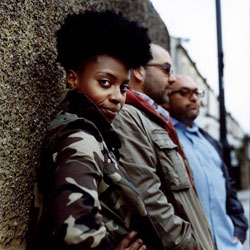 Longstanding Morcheeba fans breathed a sigh of relief earlier this year when the brothers of trip-hop Paul and Ross Godfrey announced original female vocalist Skye Edwards had returned to the fold.

As many will recall, the Godfrey brothers parted company with Edwards in 2003 following seven successful years together and the release of four chart-topping albums, Who Can You Trust, Big Calm, Fragments Of Freedom and Charango.

The trip-hop trio, renowned for radio hits such as Part Of The Process, Blindfold and of course the 1998 classic The Sea, were reunited following a chance meeting. Despite their attempts to replace her and the release of a further two albums under the same name, fans continually compared any new addition to Edwards’ unmistakably fluid vocals. Morcheeba have wasted little time in unleashing new material since Edwards returned; in June they released new album Blood Like Lemonade.

They take to the Roundhouse stage for their first official London gig since they reformed. Dressed in a fitted tartan dress with a mohican style afro, Edwards is every bit as playful as she’s ever been and greets her crowd with a wide grin before opening the set with The Sea. The majority of tonight’s crowd have clearly followed them from the onset; they are as familiar with this hit as with Friction, which follows.

“It’s so good to be back in London,” Edwards tells the crowd, having embarked on a series of back-to-back European dates since rejoining the band. “How many of you have our new album?” she asks, to which two thirds of the audience raise their hands. “And how many of you actually paid for it?” she laughs. Not quite as many hands are raised . She continues with pre-released Even Though from Blood Like Lemonade. The repetitive delay of the snare drum from start to finish is a tad reminiscent of Madonna‘s Frozen, and its catchy choral lyrics are so Morcheeba-esque it soon has everyone moving in time to the beat.

Edwards manages the crowd’s expectations throughout the set by interspersing songs from the new album with favourites from her previous seven years with the group.

Crimson, the first track on Blood Like Lemonade, is the penultimate closer. A beautiful fluid number which harbours hints of early Portishead, it sees Edwards’ vocals reach a transcendental high, rendering it the track of the night and a hard act to follow.

They attempt to close the set with Blindfold, but a rapturous encore sees them return to the stage for an acoustic version of I Am The Spring and Over And Over, as requested by the crowd.

Morcheeba complete a seamless set in which the talented trio prove, despite their years apart, that they still possess both the chemistry and creative ingredients that have made them one of the most successful chill out bands, a title they clearly have no intention of relinquishing any time soon.