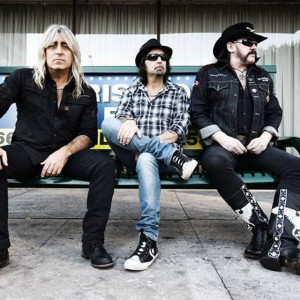 Lemmy strides out onto the generous stage at the Royal Festival Hall, toes out his cigarette with one black leather boot, expresses momentary surprise to find himself playing here at the behest of that metalhead, spokesman for a generation, culture icon and Meltdown curator Jarvis Cocker.

The sentiment is surely echoed by those hardcore fans who’ve turned up to swelter with long hair and leather jackets as he plants himself, legs spread and head tilted back to reach his trademark high microphone. Hand slides down the neck of his Rickenbacker and that intensely rhythmic bass starts to pulse, Mikkey Dee thrashes about on the drums, a whirlwind of yellow hair and flailing arms, Phil Campbell cranks up his guitar, darting around the stage, and Motörhead are off to a fast start, completely unphased by their surroundings.

Throughout Lemmy stands rooted like a gnarly oak in supernaturally tight jeans, shirt split almost to his navel, growling up at microphone, sometimes barely audible over the music as he spits out lyrics. From the front he looks just as he did when I first saw the band 27 years ago, not bad for a man in his 60s who’s led a less than quiet life.

The years have wrought some changes however. Now Lemmy doesn’t just tell his audience not to let the bastards grind you down, and to live fast and die young, he also pens distinctly political songs about the Iraq war and anthemic singalongs like Just ‘Cos You Got The Power (That Don’t Mean You Got The Right) which really get the hardcore audience going.

Half way through there’s a magnificent drum solo far longer than anything Phil Taylor offered in the early days – and truth to tell back then we would have been horrified if he had: Motörhead offered strict rock’n’roll thunder, no overblown guitar solos, no indulgent jamming, no Cozy Powell-esque showing off on the drums.

The song choices ranged around from unusual picks, such as Stay Clean from their first album, to popular anthems like Killed By Death and Ace of Spades. They threw in a rather good cover of Rosalie as a tribute to Phil Lynott of Thin Lizzy but the final encore, Overkill, performed with a barrage of strobe lighting ,was their finest moment. Every time they stopped the audience would roar, the lights dim and then with a searing blast of staccato base and flashing light it would start all over again while we jumped and whooped in response.

Having lived fast the veteran Motörhead lineup, returned to a three piece again, prove that with a comparatively modest stack of Marshall amps and a willingness to turn everything up, it only takes three men to create “heavy metal thunder.” With Lemmy’s rhythmic bass and Campbell’s wide-ranging guitar skills, not to mention Dee’s extremely energetic drumming they may not be the most technically precise outfit, or the most experimental, but as each song roared by the audience were constantly reminded that here was a band that epitomises the spirit of rock.

Precursors of punk, of speed metal, of thrash, with roots stretching back into the days of R’n’B, they gave neither a good performance nor a bad performance they just were. And what they were was magnificent.