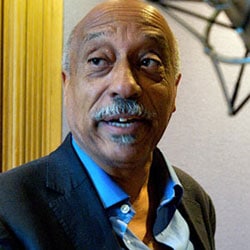 It’s easy to see why Mulatu Astatke, the father of Ethio-jazz, and the London-based Heliocentrics hit it off from the moment they met.

The two first collaborated in 2008, leading to the release of the album Inspiration Innovation, and this concert at the Barbican proved just how much they remain in tune with each other.

When Mulatu appeared to rapturous applause, he launched into a piece on the vibraphone that he had played with Duke Ellington. All around him was a plethora of sound and colour, with psychedelic images whirling on a screen in the background. As the noise receded, Mulatu ‘went solo’ and the few (apparently) simple notes he played revealed an incredible understanding of jazz in all its forms. Special mention should go to The Heliocentrics’ leader, Malcolm Catto, who controlled the sounds with panache and some well timed arm waving, and to Max Weissenfeldt on percussion. All too often the contribution of the drummer is overlooked in jazz bands, but by providing the foundation upon which everything else rests he has the power to make or break a performance.

For the next number Mulatu turned to the keyboard, while both saxes delivered some punchy phrases and Byron Wallen gave a phenomenally good trumpet solo. Emnete saw Astatke turn to the timpani, before the band launched into Yekermo Sew from the composer’s soundtrack for the 2005 film Broken Flowers. Introducing a cello to the mix, this number saw Mulatu back on the vibraphone with three sticks, switching from a relatively straight forward ‘staccato’ style to playing of a far deeper, smoother and more mystical nature.

Before the evening was out vocalist Khadijatou Doyneh was introduced to the stage, but it was a Bob Marley number that saw the dancing in the rows really take off, while the encore more than ensured that the audience stayed on a high.

Mulatu and the Heliocentrics only appeared after the interval, and the concert’s first half witnessed Krar Collective in action. This three-piece set, led by a former star pupil of Astatke, Temesgen Taraken, revealed the six-stringed Ethiopian harp, or krar, in all its glory. This remarkable instrument is adept at both beating out a rhythm and providing melody, and in Taraken’s capable hands it possessed a distinctly modern feel. With Robel Tesfaye on the kebero drums, and some exuberant dancing, we heard pieces whose roots lay in different parts of Ethiopia. The greatest revelation, however, was the smoky, spiritual singing of Genet Asefa. As the second song of the evening saw her voice descend across the hall before she had even set foot on the stage, we already knew we were in for quite a night.