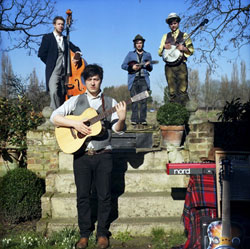 It’s a cold December evening, it’s been raining all day and Marcus Mumford has soggy feet. But he and his bandmates are soldiering on as are the 200 people who’ve found themselves in a charming courtyard round the back of the ornate St Martin-in-the-Fields church, Trafalgar Square.

Quietly building a profile as a prime example of the UK’s young melodic folk stars, in Sigh No More they finally released one of the most addictive debut albums of the year and narrowly missed the Top 10 on its release. The capacity of this gig was never going to be enough for their fans; it apparently sold out in two minutes.

About to jet off for the warmer climes of India and Australia, the band seemed to be enjoying the cold conditions of their home city, and with mulled wine and mince pies on hand, their warm, comforting songs accompanied the conditions well.

The set began as the album does, with the title track. Like Awake My Soul and I Gave You All, it follows the typical Mumford & Sons formula of gentle strumming that builds and builds, injects a pop hook and finishes it off with a hard-to-resist anthemic chorus. The songs are simple, well played and complemented by superb vocal harmonies throughout.

The four of them look like a scruffy bunch of troubadours joined together as a band and give the impression of having equal status. While the amiable Marcus Mumford took the lead with his earthy, raspy vocals, banjoist Winston Marshall and keyboard/accordion maestro Ben Lovett were both relaxed and jovial, joking with their audience with Marshall apologising to his uncle Tim for the swearwords of Little Lion Man.

In an hour long set (all they were allowed due to the local restrictions), they played the most dynamic tracks from the album. A two-man horn section arrived in time for the appropriately titled Winter Winds, adding some pomp and fanfare, and together with the banjo made the band faintly reminiscent of Beirut‘s less experimental moments.

But seeing as this was a special event, they threw in a couple of curveball cover versions as well. Roger Miller‘s Not In Nottingham from Disney’s Robin Hood film was a slow bluesy waltz that gave Mumford a chance to showcase his impressive whistling skills, and the Bob Dylan/Old Crow Medicine Show bluegrass hoedown Wagon Wheel was a welcome uptempo addition. Lovett moved over for a bash on the previously ignored drumkit as they ended the gig with new song Whispers In The Dark, hinting at a rockier direction for their future.

An unusual choice of venue for a band who have already sold out two much bigger London dates next March at the Shepherd’s Bush Empire, tonight’s gig was a chance to experience a talented young British band in their ascendancy doing it their way. If only all cold, wintry evenings were like this.