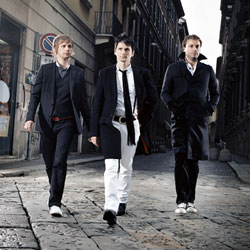 As contrasts between bands go, you don’t get much more extreme than Muse and Elbow, despite both bands recording a song called Newborn. On the one hand there’s fiercely intense drama packed with riffery, on the other sublime and deeply felt melodies. So it promised to be an interesting night for a packed arena.

“We’re Elbow from Manchester” offered Guy Garvey, and his band treated us to an unhurried sextet of songs old and new. The disappointment of not hearing Asleep At The Back – still their finest moment for me – was easily overcome by a spine-tingling rush of harmony on Fallen Angel.

Through the course of their set, and particularly the closing Grace Under Pressure, it became clear just how much work is required of drummer Richard Jupp. He obliged faultlessly, and Garvey’s guitar work was also impressive despite frequent changes of instrument. His swaying rendition of Switching Off was particularly memorable.

The arrival of Muse, however, cranked up the volume, the tempo and the force of the musical gestures. Sliding to his knees in a football style, Matt Bellamy had every frenzied guitar note and every vocal nuance right under his skin. In fact Muse are almost two bands, with Bellamy’s one-man effort including dashing from guitar to play virtuosic interludes on a keyboard straight off the set of a Terminator film, its front lighting up whenever Bellamy played.

And boy did he play, revealing much of the classical heart of the Muse style – Rachmaninov, and Bach mostly, not to mention the Prokofiev exploding out of the speakers when the band came on. Of course this was all dressed up in a 21st century rock style, which made songs like Newborn unforgettable. Many times I had to visually confirm there were only a trio on stage – drummer Dominic Howard and bassist Chris Wolstenholme were also busy, the latter triumphantly punching out the floor-wrenching opening to Time Is Running Out before lending his own keyboard sensibilities to Blackout.

By this time the exultant crowd were a sea of lighters topped by hundreds of black and silver balloons released from the ceiling, a cue for Muse to launch into the closing Hysteria, arguably their finest single to date and certainly the highest note reached by Bellamy’s falsetto all evening.

An outstanding gig then, by three musicians right at the top of their game, taking the British rock scene by storm.