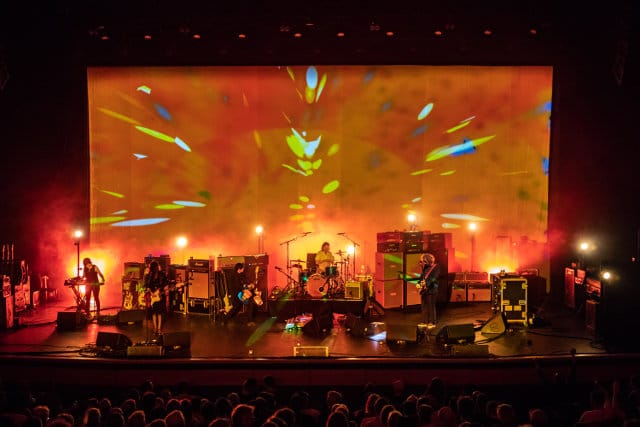 Live shows by My Bloody Valentine have long held a special, elevated status. They’re infrequent enough to provoke genuine excitement when they do happen and fearsomely loud enough to leave a lasting impression for days afterwards. That was certainly the case with tonight’s show as part of Robert Smith’s Meltdown Festival. Providing support for MBV must be a fairly daunting prospect, but The Soft Moon managed admirably tonight, their darkly industrial sound also being infused with a boundless energy.

When MBV appear on stage they open with two tracks from Loveless. I Only Sleep sees arcs of melody light up a razed landscape and When You Sleep, their biggest concession to shoegaze-pop, is further bolstered. It helps establish a level of volume that might not be as extreme as warned on the posters outside the venue, but is still utterly imposing (the complimentary earplugs handed out on entry aren’t really required). 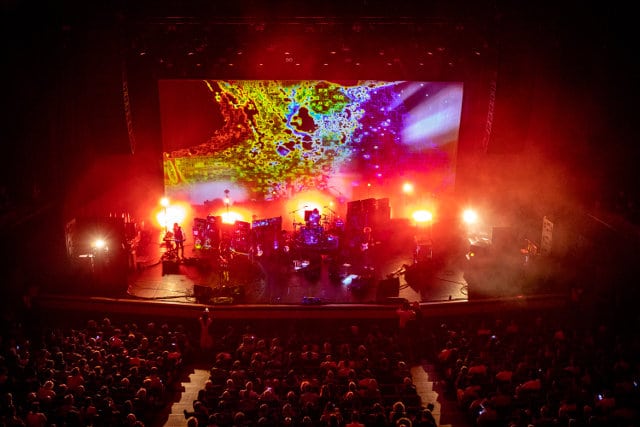 As expected, Kevin Shields and Bilinda Butcher’s vocals are low in the mix, buried under the guitar onslaught, and colourful, psychedelic visuals are projected on to a screen behind them. In the early stages it’s as if the crowd are pinned to their seats by the sheer volume, absorbing the intensity. Slowly however, the show follows the pattern of some earlier Meltdown events to become a mostly all-standing affair.

They play a new riff-heavy song which suggests a new release might appear at some point (although given their track record it’s probably best not to hold your breath for too long). They then go further back in time for Cigarette In Your Bed and an explosive Honey Power. The tracks they play from 2013’s m b v album tonight reaffirm how that release managed to sound, quite impressively, like a continuation of their work from over two decades earlier without ever feeling retrogressive. The simple melody found in New You is just about detectable under the blanket of noise, while later in the set Wonder 2 is as raw as they get (Colm Ó Cíosóig emerging from the drums to add an extra layer of guitar). 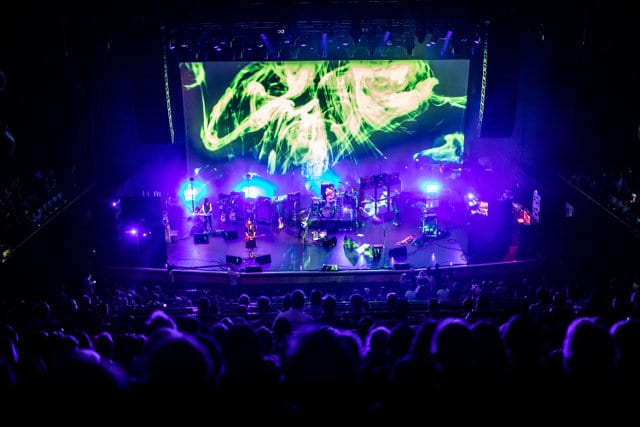 It’s the tracks from Loveless that continue to hit home strongest however. Come In Alone strikes a heavily obfuscated tone, powered by a strong billowing of noise while the crossfaded guitars of What You Want are pleasingly blown off course, as if hit by solar storms. The best comes with Only Shallow which, held back to a mid-set slot for maximum impact, absolutely tears from the stage when it arrives, all powerhouse drumming and wild torrents of sound. To Here Knows Where meanwhile still sounds like a beautiful metallic rainstorm that you’d happily spend days under. It also gives rise to thoughts on how their music has always reflected and referenced different states of consciousness, which tonight feels represented by how many tracks are engulfed by a deliberately out of focus, tapered sound.

There may be a few false starts along the way but they’re quickly forgotten when confronted by the blistering pace of Nothing Left To Lose or the raging blitz of Feed Me With Your Kiss. Most exhilarating of all is Soon, with its propelled groove and scorched dynamics, and it’s left to the ferocious You Made Me Realise to close the show. It might be a while before we see them again, but with shows like this they’ve consolidated My Bloody Valentine’s reputation as one of the most singular and iconic live bands of our times.